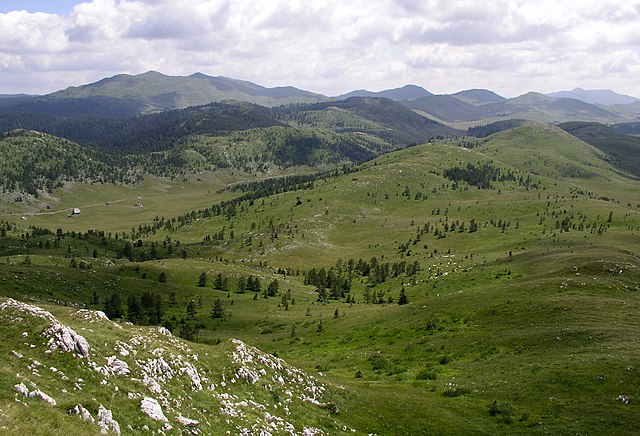 Across the Adriatic from Bari in Southern Italy sits the tiny, largely rural and mountainous, and exquisitely beautiful nation of Montenegro. At its center is a huge mountainous plateau called Sinjajevina — one of the most wonderfully non-“developed” places in Europe.

By undeveloped we should not understand uninhabited. Sheep, cattle, dogs, and pastoral people have lived on Sinjajevina for centuries, apparently in relative harmony with — indeed, as part of — the ecosystems.

About 2,000 people live on Sinjajevina in some 250 families and eight traditional tribes. They are orthodox Christians and work to maintain their holidays and customs. They are also Europeans, engaged with the world around them, the younger generation tending to speak perfect English.

I recently spoke by Zoom from the U.S. with a group of people, young and old, from Sinjajevina. The one thing that every one of them said was that they were prepared to die for their mountain. Why would they feel compelled to say that? These are not soldiers. They said nothing of any willingness to kill. There’s no war in Montenegro. These are people who make cheese and live in little wooden cabins and practice old habits of environmental sustainability.

Sinjajevina is part of the Tara Canyon Biosphere Reserve and bordered by two UNESCO World Heritage sites. What on Earth is it endangered by? The people organizing to protect it and petitioning the European Union to help them would probably be standing up for their home were it threatened by hotels or billionaires’ villas or any other sort of “progress,” but as it happens they’re trying to prevent Sinjajevina being turned into a military training ground.

“This mountain gave us life,” Milan Sekulović tells me. The young man, President of Save Sinjajevina, says that farming on Sinjajevina paid for his college education, and that — like everyone else on the mountain — he would die before he allowed it to be turned into a military base.

In case that sounds like baseless (pun intended) talk, it’s worth knowing that in the fall of 2020, the government of Montenegro tried to begin using the mountain as a military (including artillery) training ground, and the people of the mountain set up a camp and stayed in the way for months as human shields. They formed a human chain in the grasslands and risked attack with live ammunition until the military and government backed down.

Now two new questions immediately arise: Why does the tiny peaceful little nation of Montenegro need a giant mountain war-rehearsal space, and why did almost nobody hear about the courageous successful blocking of its creation in 2020? Both questions have the same answer, and it’s headquartered in Brussels.

In 2017, with no public referendum, Montenegro’s post-communist oligarchic government joined NATO. Almost immediately word began to leak out about plans for a NATO training ground. Public protests began in 2018, and in 2019 the Parliament ignored a petition with over 6,000 signatures that should have compelled a debate, instead simply announcing its plans. Those plans have not changed; people have simply thus far prevented their implementation.

If the military training ground were just for Montenegro, the people risking their lives for their grass and sheep would be a great human-interest tale — one we’d likely have heard of. If the training ground were Russian, some of the people who had thus far prevented it would probably be on their way toward sainthood or at least grants from the National Endowment for Democracy.

Every person from Sinjajevina I have spoken with has told me that they’re not against NATO or Russia or any other entity in particular. They’re just against war and destruction — and the loss of their home despite the absence of war anywhere near them.

However, now they are up against the presence of war in Ukraine. They are welcoming Ukrainian refugees. They are worrying, like the rest of us, about the environmental destruction, the possible famines, the incredible suffering, and the risk of nuclear apocalypse.

But they are also up against the major boost given to NATO by the Russian invasion. Talk in Montenegro, as elsewhere, is much more NATO-friendly now. The Montenegrin government is intent on creating its international ground for training for more wars.

What a crying shame it would be if the disastrous Russian attack on Ukraine were allowed to succeed in destroying Sinjajevina!