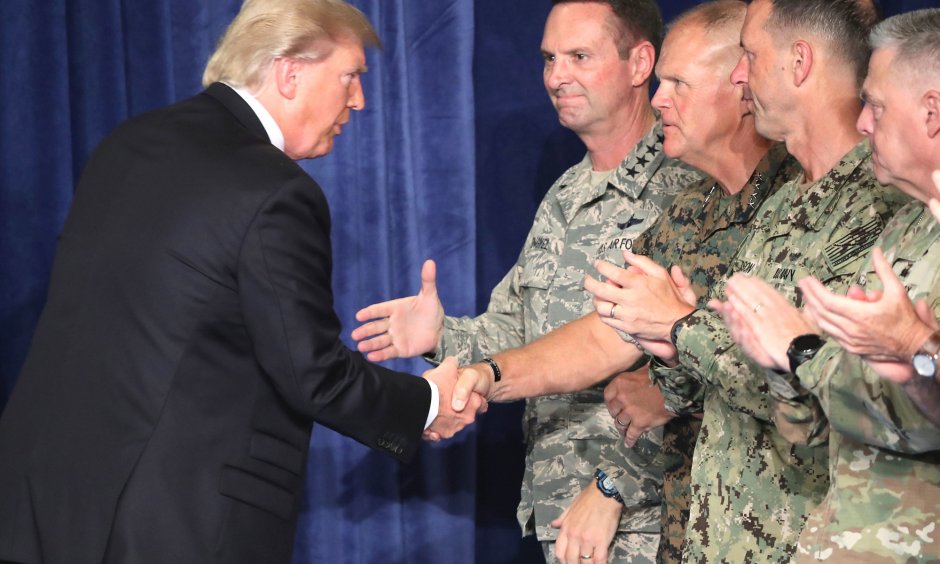 On Monday, August 21, President Donald Trump delivered a prime-time speech almost shocking in its ordinariness. It was such an address as either of his immediate predecessors, George W. Bush or Barack Obama, could easily have given over the previous decade and a half. While hinting at nebulous new strategies and ill-defined new metrics to measure success, President Trump announced that the 17 year old war in Afghanistan will go on pretty much as it has. And the establishment breathed a sigh of relief.

Reviews were glowing. While acknowledging how low the bar had been set, on August 25, the Washington journal The Hill opined that “even the most hardened members of the anti-Trump camp must admit that Monday’s speech communicated a remarkable amount of humility and self-awareness, particularly for this president.” The timing of the president’s crowd pleasing speech was duly noted: “Unfortunately, his very presidential announcement of the Afghanistan decision was bookended by Charlottesville and the president’s rally in Phoenix on Tuesday night.”

Ten days before, in Charlottesville, Virginia, torch bearing white supremacists had marched in a “Unite the Right” rally to protest the planned removal of a statue of the Confederate General Robert E. Lee. Replete with flags of both the Confederacy and the Nazi Third Reich and traditional fascist chants of “blood and soil,” the rally met with resistance from anti-racist activists, one of whom was murdered and others injured when one of the united right used his car as a weapon of terror, driving it into the crowd. There was outrage when Trump responded by condemning the violence “on all sides” and declaring that there are “very fine people” on both sides of the issue.

In the next days, thousands marched in cities nationwide and the denunciations of racism and white supremacy resounded from many surprising quarters. Trump’s tolerance of the use and celebration of overt symbols and slogans associated with hatred, slavery, anti-Semitism and genocide offended all but his most fanatical base. Members of his own party, many who had stood by Trump through other scandals, took steps to distance themselves from his statements, if not from Trump himself.

Five of the Joint Chiefs of Staff, representing the Navy, Marines, Army, Air Force and National Guard, came extraordinarily close to rebuking their commander in chief. While they did not address Trump by name, they posted massages on social media condemning neo-Nazis and hatred, citing the events at Charlottesville. “@USNavy for ever stands against intolerance and hatred.” “No place for racial hatred or extremism in @USMC.” “The Army does not tolerate racism, extremism or hatred in its ranks.” “We’re always stronger together- it’s who we are as # Airmen.” “I stand with my fellow Joint Chiefs in condemning racism, extremism & hatred. Our diversity is our strength # NationalGuard.”

In his primetime address on the war, Trump called for the national unity that he had seemed in the days before and after to disdain- “Loyalty to our nation demands loyalty to one another.” Saying that “the young men and women we send to fight our wars abroad deserve to return to a country that is not at war with itself at home,” Trump seemed even to shame his detractors for letting down those he calls the “special class of heroes whose selflessness, courage, and resolve is unmatched in human history.” . Let us make a simple promise to the men and women we ask to fight in our name: that when they return home from battle, they will find a country that has renewed the sacred bonds of love and loyalty that unite us together as one.”

The healing balm that should bring Americans together, Trump said to general applause, will be a continuing commitment to a seventeen year old war. When that war began in October of 2001, Vice-President Richard Cheney suggested that the US would eventually take it to forty to fifty other nations, an expanding war that he predicted “may never end” but would “become a permanent part of the way we live.” Like Cheney before him, Trump urges Americans to set aside the issues that divide us and unite behind an endless war of aggression against a people who never meant us harm.

It should be self-evident that the war against Afghanistan and the broader war on terror, like every war that the US has engaged in since the end of World War II, is as much a war about race and white supremacy as was the Civil War. The fact that the war on terror was presided over for eight years by our first African American president (who in his last year in office dropped 26,171 bombs exclusively over populations of people of color) does not alter the fact that it is a racist war. If the war on terror does not divide our nation’s people as severely as did our war against the people of Southeast Asia fifty years ago, it is only because fewer Americans are paying attention to it.

In 1967, Dr. Martin Luther King, Jr. noted “Now, it should be incandescently clear that no one who has any concern for the integrity and life of America today can ignore the present war.” He said that for those working against racism in the US, silence on the war against Vietnam was nothing less than betrayal. Many questioned whether peace and civil rights mix and if by trying, King was hurting the cause of his people. “Indeed,” he said of these critics, “their questions suggest that they do not know the world in which they live.” About that same time, Eldridge Cleaver said “The black man’s (sic) interest lies in seeing a free and independent Vietnam, a strong Vietnam which is not the puppet of international white supremacy. If the nations of Asia, Latin America and Africa are strong and free, the black man in America will be safe and secure and free to live in dignity and self-respect.” Last year, the Movement for Black Lives excited great controversy publishing its platform that draws these connections in the present context: “…we know that patriarchy, exploitative capitalism, militarism, and white supremacy know no borders. We stand in solidarity with our international family against the ravages of global capitalism and anti-Black racism, human-made climate change, war, and exploitation. We also stand with descendants of African people all over the world in an ongoing call and struggle for reparations for the historic and continuing harms of colonialism and slavery. We also recognize and honor the rights and struggle of our Indigenous family for land and self-determination.”

The violence that we see in American streets is a direct and inevitable result of the violence of our county’s wars. Since the war on terror began, police departments from large cities to rural counties have been plied by the Defense Department with an array of offensive weaponry from tanks to assault rifles, accompanied with training in counterinsurgency. Police department hiring preferences favor veterans who often bring with them skills honed in night raids of Iraqi and Afghan homes. Full scale Special Weapons and Assault Tactics (SWAT) teams then terrorize American families, disproportionally in communities of color and most often to serve simple warrants and summonses for nonviolent offences.

The Obama administration’s determinations that any male 14 years or older found dead in a drone strike zone is a “combatant” unless explicit intelligence posthumously proves him innocent and that “the condition that an operational leader present an ‘imminent’ threat of violent attack against the United States does not require the United States to have clear evidence that a specific attack on US persons and interests will take place in the immediate future,” have poisoned the culture of policing at home. The consequence of these policies is the summary killings of innocent young men because of who they are and where they live, in American cities as well as in places far way. The racial profiling that results in the killings of unarmed black citizens by American police is the domestic expression of surveillance by drones of the “patterns of behavior” that trigger the “signature strike” executions of countless people of color in our wars abroad.

“A nation which continues year after year to spend more money on military defense than on programs of social uplift is approaching spiritual death,” Dr. King noted in 1967. There is no serious discussion of racism in the United States today, or of providing healthcare and education and basic human services that does not address the ever expanding cost of the present war.

Some of the outrage over the Trump’s responses to the events in Charlottesville and for his shameless affinity for hate and misogyny in general from his campaign until today may well actually be for his violation of a tacit “gentlemen’s” agreement not to say such things aloud. None the less, it is a sign of social progress that language and symbols celebrating hate raise so much public indignation. The discredited institutions of slavery and Nazism need to stay discredited and those who forget that are rightly and necessarily called out. There are, however, manifestations of hatred and racism that continue to be tolerated and celebrated even in the most polite, progressive and politically correct venues and these need be called out as well.

As grating and offensive as Trump’s off-script train wreck persona is, it is when he is most “very presidential,” when he acts and speaks from the same teleprompter as those who preceded him, that he is at his most malicious and hateful. When he declares as he did on August 21 that “we are killing terrorists” and threatens “attack we will” and when he praises the civilian catastrophe that he called the “liberation of Mosul in Iraq” as a model for the future of the war in Afghanistan, Trump is on a racist rant. His speech on August 21 calling for more war is hate speech, pure and simple.

The generals of the Joint Chiefs of Staff who bravely spoke out against neo-Nazis, where are they now? Some of them apparently huddled with Trump to devise his hateful and racist assault on the Afghan people and all of them, along with Defense Secretary General Mattis (whose advice to the troops is “You just hold the line until our country gets back to understanding and respecting each other and showing it.”) and White House Chief of Staff General Kelly are busily working to implement it. If generals Lee and Jackson of the 19th century who served under Confederate President Jefferson Davis in the cause of slavery and white supremacy deserve the censure of history and the scorn of every person of good will, so much more these generals who serve the hateful and vile agenda of Trump and his predecessors. To give Trump his due, one truth that he told in his celebrated speech is that those “who slaughter innocent people will find no glory in this life or the next. They are nothing but thugs and criminals and predators, and that’s right—losers.”

Those thousands of good people who took to the streets to denounce the celebration of racism and hate in its archaic and discredited forms need to seek the courage get back out and demand an end to racism and hate in its present, most virulent form. Together we need to demand a US withdrawal from Afghanistan and reparations for all the nations that have suffered US aggression in the so-called war on terror.