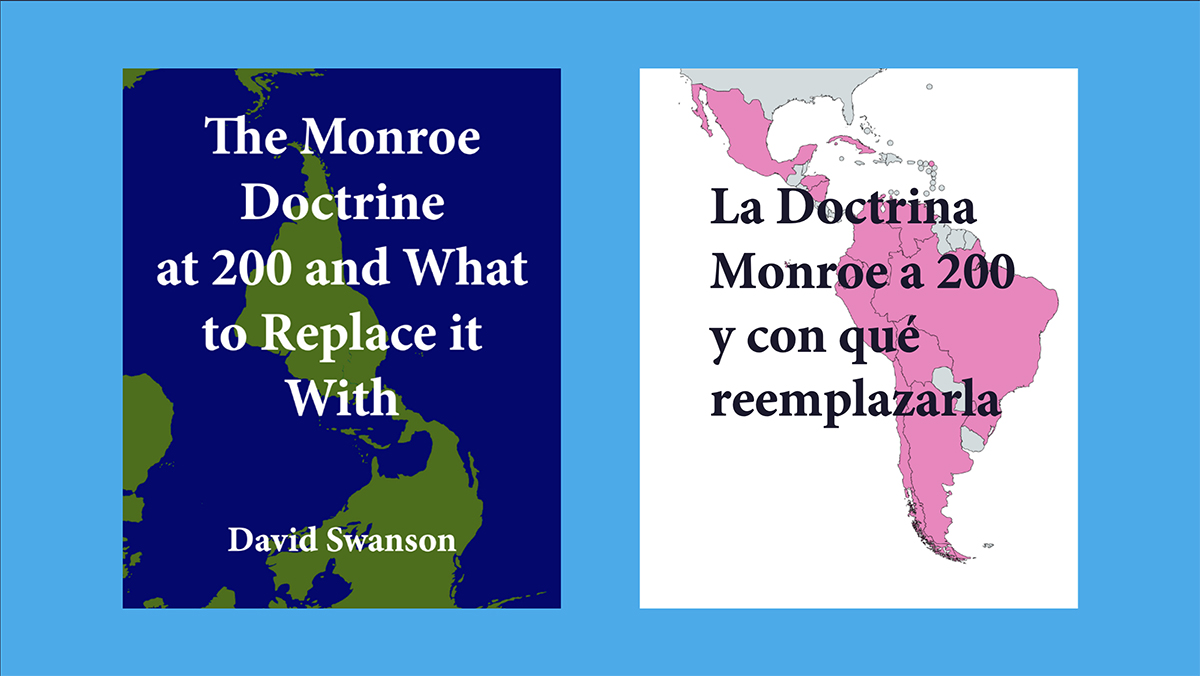 David Swanson is the author of the new book The Monroe Doctrine at 200 and What to Replace It With.

The Monroe Doctrine was and is a justification for actions, some good, some indifferent, but the overwhelming bulk reprehensible. The Monroe Doctrine remains in place, both explicitly and dressed up in novel language. Additional doctrines have been built on its foundations. Here are the words of the Monroe Doctrine, as carefully selected from President James Monroe’s State of the Union Address 200 years ago on December 2, 1823:

“The occasion has been judged proper for asserting, as a principle in which the rights and interests of the United States are involved, that the American continents, by the free and independent condition which they have assumed and maintain, are henceforth not to be considered as subjects for future colonization by any European powers. . . .

“We owe it, therefore, to candor and to the amicable relations existing between the United States and those powers to declare that we should consider any attempt on their part to extend their system to any portion of this hemisphere as dangerous to our peace and safety. With the existing colonies or dependencies of any European power, we have not interfered and shall not interfere. But with the Governments who have declared their independence and maintained it, and whose independence we have, on great consideration and on just principles, acknowledged, we could not view any interposition for the purpose of oppressing them, or controlling in any other manner their destiny, by any European power in any other light than as the manifestation of an unfriendly disposition toward the United States.”

These were the words later labeled the “Monroe Doctrine.” They were lifted from a speech that said a great deal in favor of peaceful negotiations with European governments, while celebrating as beyond question the violent conquering and occupying of what the speech called the “uninhabited” lands of North America. Neither of those topics was new. What was new was the idea of opposing further colonization of the Americas by Europeans on the basis of a distinction between the bad governance of European nations and the good governance of those in the American continents. This speech, even while repeatedly using the phrase “the civilized world” to refer to Europe and those things created by Europe, also draws a distinction between the type of governments in the Americas and the less-desirable type in at least some European nations. One can find here the ancestor of the recently advertised war of democracies against autocracies.

The Doctrine of Discovery — the idea that a European nation can claim any land not yet claimed by other European nations, regardless of what people already live there — dates back to the fifteenth century and the Catholic church. But it was put into U.S. law in 1823, the same year as Monroe’s fateful speech. It was put there by Monroe’s lifelong friend, U.S. Supreme Court Chief Justice John Marshall. The United States considered itself, perhaps alone outside of Europe, as possessing the same discovery privileges as European nations. (Perhaps coincidentally, in December 2022 almost every nation on Earth signed an agreement to set aside 30% of the Earth’s land and sea for wildlife by the year 2030. Exceptions: the United States and the Vatican.)

In cabinet meetings leading up to Monroe’s 1823 State of the Union, there was much discussion of adding Cuba and Texas to the United States. It was generally believed that these places would want to join. This was in line with these cabinet members’ common practice of discussing expansion, not as colonialism or imperialism, but as anti-colonial self-determination. By opposing European colonialism, and by believing that anyone free to choose would choose to become part of the United States, these men were able to understand imperialism as anti-imperialism.

We have in Monroe’s speech a formalization of the idea that “defense” of the United States includes defense of things far from the United States that the U.S. government declares an important “interest” in. This practice continues explicitly, normally, and respectably to this day. The “2022 National Defense Strategy of the United States,” to take one example of thousands, refers consistently to defending U.S. “interests” and “values,” which are described as existing abroad and including allied nations, and as being distinct from the United States or the “homeland.” This was not brand new with the Monroe Doctrine. Had it been, President Monroe could not have stated in the same speech that, “the usual force has been maintained in the Mediterranean Sea, the Pacific Ocean, and along the Atlantic coast, and has afforded the necessary protection to our commerce in those seas.” Monroe, who had bought the Louisiana Purchase from Napoleon for President Thomas Jefferson, had later expanded U.S. claims westward to the Pacific and in the first sentence of the Monroe Doctrine was opposing Russian colonization in a part of North America far removed from the western border of Missouri or Illinois. The practice of treating anything placed under the vague heading of “interests” as justifying war was strengthened by the Monroe Doctrine and later by the doctrines and practices built on its foundation.

We also have, in the language surrounding the Doctrine, the definition as a threat to U.S. “interests” of the possibility that “the allied powers should extend their political system to any portion of either [American] continent.” The allied powers, the Holy Alliance, or the Grand Alliance, was an alliance of monarchist governments in Prussia, Austria, and Russia, which stood for the divine right of kings, and against democracy and secularism. Weapons shipments to Ukraine and sanctions against Russia in 2022, in the name of defending democracy from Russian autocracy, are part of a long and mostly unbroken tradition stretching back to the Monroe Doctrine. That Ukraine may not be much of a democracy, and that the U.S. government arms, trains, and funds the militaries of most of the most oppressive governments on Earth are consistent with past hypocrisies of both speech and action. The slaveholding United States of Monroe’s day was even less of a democracy than is today’s United States. The Native American governments that go unmentioned in Monroe’s remarks, but which could look forward to being destroyed by Western expansion (some of which governments had been as much an inspiration for the creation of the U.S. government as had anything in Europe), were often more democratic than the Latin American nations Monroe was claiming to defend but which the U.S. government would often do the opposite of defending.

Those weapons shipments to Ukraine, sanctions against Russia, and U.S. troops based throughout Europe are, at the same time, a violation of the tradition supported in Monroe’s speech of staying out of European wars even if, as Monroe said, Spain “could never subdue” the anti-democratic forces of that day. This isolationist tradition, long influential and successful, and still not eliminated, was largely undone by U.S. entry into the first two world wars, since which time U.S. military bases, as well as the U.S. government’s understanding of its “interests,” have never left Europe. Yet in 2000, Patrick Buchanan ran for U.S. president on a platform of supporting the Monroe Doctrine’s demand for isolationism and avoidance of foreign wars. 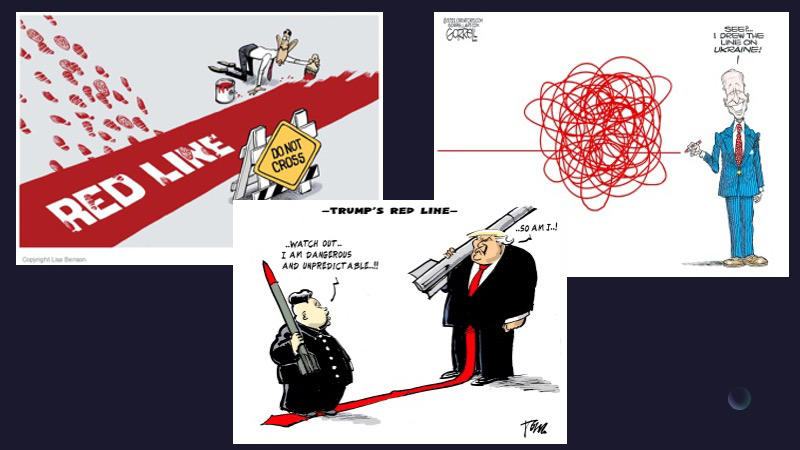 The Monroe Doctrine also advanced the idea, still very much alive today, that a U.S. president, rather than the U.S. Congress, can determine where and over what the United States will go to war — and not just a particular immediate war, but any number of future wars. The Monroe Doctrine is, in fact, an early example of the all-purpose “authorization for the use of military force” pre-approving any number of wars, and of the phenomenon much beloved by U.S. media outlets today of “drawing a red line.” As tensions grow between the United States and any other country, it has been common for years for the U.S. media to insist that the U.S. president “draw a red line” committing the United States to war, in violation not only of the treaties that ban warmaking, and not only of the idea expressed so well in the same speech that contains the Monroe Doctrine that the people should decide the course of the government, but also of the Constitutional bestowal of war powers on the Congress. Examples of demands for and insistence on following through on “red lines” in U.S. media include the ideas that:

David Swanson is the author of the new book The Monroe Doctrine at 200 and What to Replace It With.