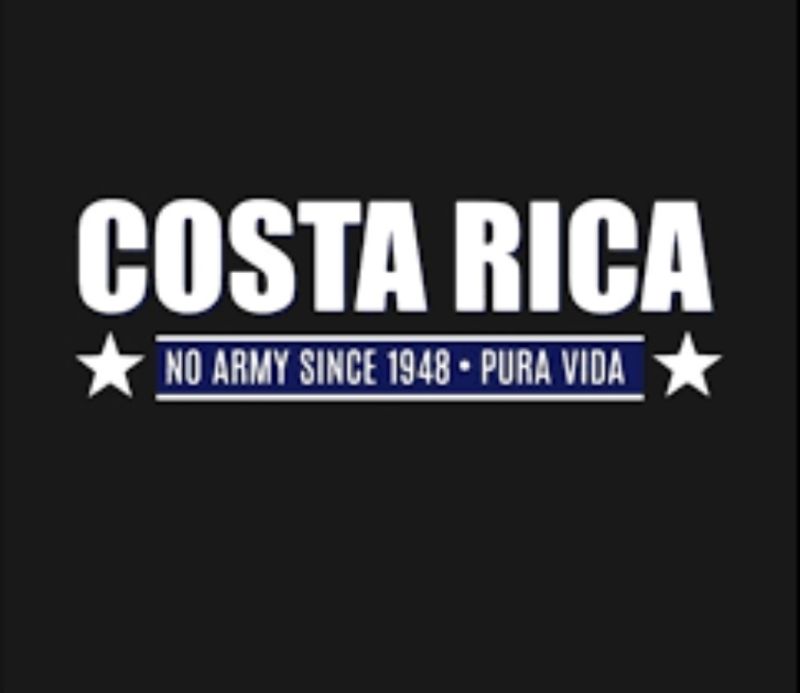 “Birds Are Not Real” — the theory that all birds are drones — is a prank created for a laugh, supposedly with a few mentally disturbed people actually believing it. “Costa Rica Is Not Real” has never been spoken at all, and yet is treated very seriously by many. I mean, everyone will admit that Costa Rica is sitting there on the map, and in reality, between Nicaragua and Panama, the Pacific and the Caribbean. Yet, a nation’s need for an ever-larger military (referred to even by peace activists not paid a dime for the service as “a defense”) is routinely attributed to a mysterious substance called “human nature” even though Costa Rica — assuming it exists and contains humans — abolished its military 74 years ago, and every other nation on Earth without exception spends closer to Costa Rica’s $0 on its own military than to what the United States spends on the military funded by the 4% of humanity that determines what “human nature” is.

The possibility that Costa Rica did something significant and hugely beneficial by abolishing its military is generally dealt with by ignoring it, but sometimes by making excuses for it — by claiming that Costa Rica secretly really does have a military, or claiming that the U.S. military defends Costa Rica, or claiming that Costa Rica’s example is unlike and unuseful for any other country. We would all benefit from reading Judith Eve Lipton and David P. Barash’s book, Strength Through Peace: How Demilitarization Led to Peace and Happiness in Costa Rica, and What the Rest of the World Can Learn from a Tiny Tropical Nation. Here we learn not to ignore what Costa Rica means, and we learn that Costa Rica does not secretly have a military, and that the United States military does not serve any function for Costa Rica, and that many of the factors that probably contributed to Costa Rica’s abolition of its military, as well as many of the benefits that have probably resulted, are probably subject to duplication elsewhere, even though no two countries are identical, human affairs are highly complicated, and the nations that have done exactly what Costa Rica has done make up a data set of 1.

Costa Rica sits in an economically poor part of the world and is itself relatively poor, but when it comes to rankings of well-being, of happiness, of life-expectancy, of health, of education, it is never ranked anywhere near any of its neighbors, and is usually ranked at the global top of the charts among much wealthier countries. Ticos, as residents of Costa Rica are called, engage in a bit of exceptionalism, in fact, taking pride in their abolition of their military, in their remarkably democratic traditions and social programs, in their high levels of education and health, in their possibly largest-percentage-of-land-in-the-world protection of wild areas in parks and reserves, and in their 99% renewably sourced electricity. In 2012 Costa Rica banned all recreational hunting. In 2017, Costa Rica’s UN representative led the council that negotiated the Treaty on the Prohibition of Nuclear Weapons. When I wrote a book about Curing Exceptionalism, this was not what I had in mind. I was writing about a country that leads in environmental destruction, incarceration, militarism, and arrogant scorn for other countries. I have no criticism for taking pride in doing good things.

Of course Costa Rica as a perfect utopia really is unreal. It is no such thing, not even close. In fact if you live in the United States and avoid the rough neighborhoods and the military bases and weapons plants and thoughts of what the government does around the world, and if the mass shootings miss you, you’ll probably consider it a more peaceful, trusting, and nonviolent place than Costa Rica. Unfortunately, Costa Rica does not have a low level of interpersonal violence or robbery or car theft. This peacemaking paradise is filled with barbed wire and alarm systems. The Global Peace Index ranks Costa Rica 39th and the United States 122nd, rather than 1st and 163rd, by factoring in domestic security, not just militarism. Costa Rica also suffers from pollution, bureaucratic inertia, corruption, endless delays — including for healthcare, drug trafficking, human trafficking, gang violence, and second-class status for “illegal” immigrants especially from Nicaragua.

But Costa Ricans send none of their kids off to kill and die or come back damaged from wars. They fear no blowback from their nonexistent wars. They fear no attacks by their military enemies aimed at taking out their nonexistent weapons. They live with relatively little resentment of systemic injustice or massive wealth inequality or mass incarceration. While global indices rank Costa Rica as fairly and increasingly unequal, its culture seems to maintain a preference for equality and shame for conspicuous consumption.

Costa Rica had the great good fortune to lack gold or silver or oil or useful ports or the best land for slave plantations or a suitable location for a canal or road from sea to sea. It has suffered very few wars, but just enough military coups to view a military as a threat.

In 1824, Costa Rica abolished slavery — rather shamefully from a U.S. perspective in that it did so without a war to be proud of. In 1825, the President of Costa Rica argued that existing citizen militias rendered no need for any military. In 1831 Costa Rica decided to give coastal lands to poor people and to compel citizens to grow crops in demand in Europe, such as coffee, sugar, and cocoa. This helped establish a tradition of small family farms.

In 1838 Costa Rica separated from Nicaragua. The people of the two countries are virtually indistinguishable genetically. Yet one has lived with virtually no wars, and the other with virtually non-stop wars right up through today. The difference is cultural, and predates the 1948 abolition of Costa Rica’s military. Costa Rica did not come into existence through a glorious war endlessly celebrated, but through signing some papers.

Costa Rica abolished the death penalty in 1877. In 1880, the Costa Rican government bragged about having only 358 active members of a military. In 1890, a report by the Costa Rican Minister of War found that Ticos were almost totally indifferent to and mostly unaware of having a military, and when aware of it regarded it with “a certain disdain.”

(Psst: Some of us think the same way in the United States but can you just imagine saying so aloud? — Ssshh!)

In 1948, the President of Costa Rica abolished the military — celebrated on December 1 as Army Abolition Day — after the Minister of Security (by his later account) argued in favor of doing so in order to justify higher education spending.

Within a week and a half, Costa Rica was under attack from Nicaragua. Costa Rica appealed to the Organization of American States which compelled the invaders to back down. According to the film A Bold Peace, Costa Rica also raised a temporary militia. The same thing happened in 1955, with the same result. Notably, the U.S. government seems to have thought it would look unacceptably bad following its coup in Guatemala for it to fail to oppose the invasion of the only unarmed and only democratic country in Central America.

Costa Rica survived the U.S.-Soviet Cold War and Ronald Reagan years through maintaining neutrality and a stated ban on “communism” even while instituting leftist policies. Its neutrality even allowed it to refuse to support Iran-Contra and to negotiate peace in Nicaragua, much to the U.S. government’s chagrin.

In the 1980s, nonviolent activism rolled back electricity rate increases. I think this is the only mention of activism in Strength Through Peace, which leaves the reader wondering about the no-doubt existent tradition of activism before and after that time, and what role it may have played and still play in creating and maintaining a military-free country. There’s one other sort of activism touched on: In 2003, the Costa Rican government tried to join in the U.S. “Coalition of the Willing” to attack Iraq, but a law student sued and blocked the action as unconstitutional.

Why isn’t Costa Rica’s example spreading? The obvious answers are war profits and war culture, ignorance of alternatives, and the vicious cycle of war threats and fears. But perhaps it is spreading. Southern neighbor Panama, while a U.S. puppet, not only has no military of its own but nonviolently compelled the U.S. to hand over the canal and to remove its military.

Strength Through Peace is a remarkably well-informed, well-argued, and well-documented book. While it fails to argue for military abolition everywhere, fails to discuss the alternative of unarmed defense, and even claims that the United States has “a genuine need for at least some military capacity,” I am nonetheless adding it to the following list because of what it tells us about Costa Rica as a guiding light for a world trapped in the darkness of war thinking.

Ethics, Security, and The War-Machine: The True Cost of the Military by Ned Dobos, 2020.
Understanding the War Industry by Christian Sorensen, 2020.
No More War by Dan Kovalik, 2020.
Strength Through Peace: How Demilitarization Led to Peace and Happiness in Costa Rica, and What the Rest of the World Can Learn from a Tiny Tropical Nation, by Judith Eve Lipton and David P. Barash, 2019.
Social Defence by Jørgen Johansen and Brian Martin, 2019.
Murder Incorporated: Book Two: America’s Favorite Pastime by Mumia Abu Jamal and Stephen Vittoria, 2018.
Waymakers for Peace: Hiroshima and Nagasaki Survivors Speak by Melinda Clarke, 2018.
Preventing War and Promoting Peace: A Guide for Health Professionals edited by William Wiist and Shelley White, 2017.
The Business Plan For Peace: Building a World Without War by Scilla Elworthy, 2017.
War Is Never Just by David Swanson, 2016.
A Global Security System: An Alternative to War by World Beyond War, 2015, 2016, 2017.
A Mighty Case Against War: What America Missed in U.S. History Class and What We (All) Can Do Now by Kathy Beckwith, 2015.
War: A Crime Against Humanity by Roberto Vivo, 2014.
Catholic Realism and the Abolition of War by David Carroll Cochran, 2014.
War and Delusion: A Critical Examination by Laurie Calhoun, 2013.
Shift: The Beginning of War, the Ending of War by Judith Hand, 2013.
War No More: The Case for Abolition by David Swanson, 2013.
The End of War by John Horgan, 2012.
Transition to Peace by Russell Faure-Brac, 2012.
From War to Peace: A Guide To the Next Hundred Years by Kent Shifferd, 2011.
War Is A Lie by David Swanson, 2010, 2016.
Beyond War: The Human Potential for Peace by Douglas Fry, 2009.
Living Beyond War by Winslow Myers, 2009.
Enough Blood Shed: 101 Solutions to Violence, Terror, and War by Mary-Wynne Ashford with Guy Dauncey, 2006.
Planet Earth: The Latest Weapon of War by Rosalie Bertell, 2001.
Boys Will Be Boys: Breaking the Link Between Masculinity and Violence by Myriam Miedzian, 1991.