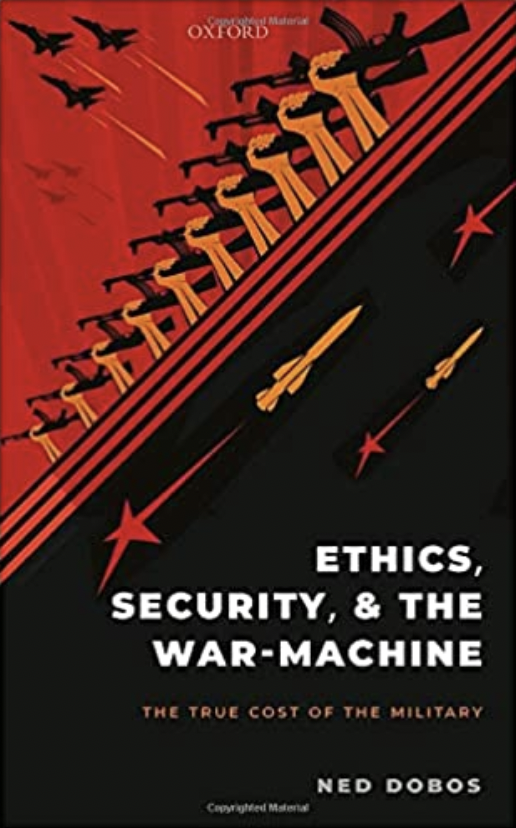 I’ve just become aware of and read the 2020 book by Ned Dobos, Ethics, Security, and The War-Machine: The True Cost of the Military. It makes a pretty strong case for the abolition of militaries, even while concluding that it may or may not have done so, that the matter should be taken on a case-by-case basis.

Dobos sets aside the question of whether any war can be justified, arguing instead that “there may be cases where the costs and risks generated by a military establishment are too great for its existence to be justified, and this is even if we think that some wars are necessary and consistent with the demands of morality.”

The case that Dobos makes overlaps significantly with the one that World BEYOND War has always made. Dobos looks a bit at the financial tradeoffs, covers the moral damage to recruits very well, discusses how militaries tend to endanger rather than protect, investigates in some depth the corrosion and militarization of culture and society including police and including history classes, and of course touches on the problem of all the indisputably unjust wars engaged in by militaries whose disastrous existence is justified by the theory that a just war might someday be conceivable.

Central arguments to World BEYOND War’s case largely missing from Dobos’ include the environmental damage done by militaries, the erosion of civil liberties, the justification for government secrecy, the fueling of bigotry, and the creation of the risk of nuclear apocalypse.

One factor that Dobos looks at, that I think we at World BEYOND War haven’t looked at sufficiently, is the extent to which maintaining a military increases the risk of a coup. This was of course a motivation for Costa Rica’s abolition of its military. According to Dobos it is also a general motivation for the division of militaries into numerous branches. (I guess I supposed that arose from tradition or a general penchant for inefficiency and incompetence.) Dobos also suggests various reasons why a professional, non-volunteer military could be a greater risk factor for coups. I would add that a military that facilitates many coups abroad might also create a greater risk of a coup at home. It’s odd, in light of this discussion, that the only thing advocated by most of those denouncing former U.S. president Trump for having wanted or still wanting a coup is greater military action in the U.S. Capitol, not less.

Even where Dobos’ case overlaps in general form with other familiar arguments, it is loaded with details worth considering. For example:

“In the near future … familiar methods of routinization and dehumanization may be supplemented by chemical interventions that insulate soldiers from the moral and emotional stressors of war-fighting. The beta-blocker Propranolol, for instance, has been tested for use in the treatment of combat-induced mental afflictions such as post-traumatic stress disorder (PTSD). The drug works by paralysing the emotions; under its influence a person exposed to a disturbing event remembers the raw details of that event, but does not experience any emotion in response to it. … Barry Romo, a national coordinator for Vietnam Veterans Against the War, called it the ‘devil pill’, the ‘monster pill’, and the ‘anti-morality pill’.”

When discussing what military training does to trainees, Dobos waives off the possibility that training and conditioning for violence can make violence more likely post-military, including violence against people deemed to matter: “To be clear, none of this is meant to suggest that those who undergo military conditioning pose a danger to the civilian society to which they belong. Even if combat training does desensitize them to violence, soldiers are also taught to respect authority, to follow rules, to exercise self-restraint, and so on.” But the fact that U.S. mass shooters are disproportionately veterans is disturbing.

Ned Dobos teaches at the Australian [so-called] Defence Force Academy. He writes very clearly and carefully, but also with undue respect for nonsense of this sort:

“The most recent example of preventive war was the US-led invasion of Iraq in 2003. Although there was no reason to believe that Saddam Hussein was preparing an attack on the United States or its allies, the prospect that he might do some day, or that he might supply WMDs to terrorists who would carry out such an attack, created a ‘compelling case’ for ‘anticipatory action to defend ourselves’ according to George W. Bush.”

“The Just War principle of last resort states that peaceful solutions must be exhausted before recourse to war is taken, otherwise war is unjust in virtue of being unnecessary. Two interpretations of this requirement are available. The ‘chronological’ version says that all non-violent alternatives must actually be tried and fail before military force can legitimately be used. The ‘systematic’ interpretation is less demanding. It requires only that all alternatives be seriously considered. If a judgement is reached, in good faith, that no such alternative is likely to be effective, then going to war can be a ‘last resort’ even where it is the first thing we actually try.”

Nowhere does Dobos — or as far as I know anyone else ever — explain what it would look like to run out of possible non-war actions. Dobos draws his conclusions without apparently considering alternatives to war, but adds an epilogue to the book looking briefly at the idea of unarmed civilian defense. He does not include any broader vision of what it could mean to support the rule of law, promote cooperation, provide actual aid in place of weaponry, etc.

I hope that this book is reaching in large numbers just the audience that is open to it — presumably through classrooms, since I doubt many people are buying it for $64, the cheapest price I can find online.

Despite this book standing out from the rest in the following list in not explicitly arguing for the abolition of war, I’m adding it to the list, because it makes the case for abolition, whether it wants to or not.

Ethics, Security, and The War-Machine: The True Cost of the Military by Ned Dobos, 2020.
Understanding the War Industry by Christian Sorensen, 2020.
No More War by Dan Kovalik, 2020.
Social Defence by Jørgen Johansen and Brian Martin, 2019.
Murder Incorporated: Book Two: America’s Favorite Pastime by Mumia Abu Jamal and Stephen Vittoria, 2018.
Waymakers for Peace: Hiroshima and Nagasaki Survivors Speak by Melinda Clarke, 2018.
Preventing War and Promoting Peace: A Guide for Health Professionals edited by William Wiist and Shelley White, 2017.
The Business Plan For Peace: Building a World Without War by Scilla Elworthy, 2017.
War Is Never Just by David Swanson, 2016.
A Global Security System: An Alternative to War by World Beyond War, 2015, 2016, 2017.
A Mighty Case Against War: What America Missed in U.S. History Class and What We (All) Can Do Now by Kathy Beckwith, 2015.
War: A Crime Against Humanity by Roberto Vivo, 2014.
Catholic Realism and the Abolition of War by David Carroll Cochran, 2014.
War and Delusion: A Critical Examination by Laurie Calhoun, 2013.
Shift: The Beginning of War, the Ending of War by Judith Hand, 2013.
War No More: The Case for Abolition by David Swanson, 2013.
The End of War by John Horgan, 2012.
Transition to Peace by Russell Faure-Brac, 2012.
From War to Peace: A Guide To the Next Hundred Years by Kent Shifferd, 2011.
War Is A Lie by David Swanson, 2010, 2016.
Beyond War: The Human Potential for Peace by Douglas Fry, 2009.
Living Beyond War by Winslow Myers, 2009.
Enough Blood Shed: 101 Solutions to Violence, Terror, and War by Mary-Wynne Ashford with Guy Dauncey, 2006.
Planet Earth: The Latest Weapon of War by Rosalie Bertell, 2001.
Boys Will Be Boys: Breaking the Link Between Masculinity and Violence by Myriam Miedzian, 1991.