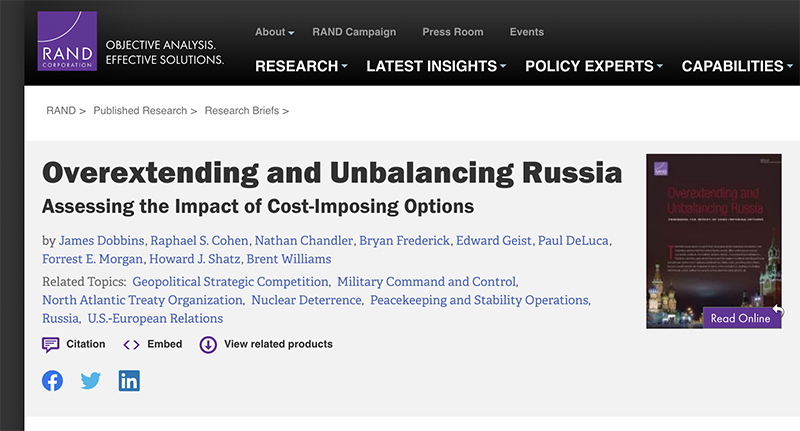 In 2019, the RAND Corporation tentacle of the U.S. Military Industrial Congressional “Intelligence” Media Academic “Think” Tank Complex published a report claiming to have “conducted a qualitative assessment of ‘cost-imposing options’ that could unbalance and overextend Russia.”

Here was one of the “cost-imposing options,” one that U.S. President Barack Obama had been refusing, but in 2019, RAND was preparing for a regime change at home: “Providing lethal aid to Ukraine.”

Doing that, RAND said, “would exploit Russia’s greatest point of external vulnerability. But any increase in U.S. military arms and advice to Ukraine would need to be carefully calibrated to increase the costs to Russia of sustaining its existing commitment without provoking a much wider conflict in which Russia, by reason of proximity, would have significant advantages.”

Thus far the calibration seems to be OK, as a “much wider conflict” has not yet happened. But Congress/Parliament Members, weapons dealers, and enthusiastic numbskull onlookers are pushing for it in the United States, other NATO nations, and Russia. The notion of being able to properly “calibrate” these things has been disproven thousands of times. The disgusting arrogance of the RAND report recommending increased military and nuclear threats to Russia illustrates how blind people can be to the risks they are creating.

So, yes, it’s wonderful to have the U.S. corporate media suddenly against a war and in support of protests, and in sympathy with victims. One might have thought the U.S. media incapable of such things after all of these years and all of these wars. But remember that a pleasant sounding report on “cost-imposing options” was a plan to risk the murder of little children in Ukraine.

And, yes, the criminal thugs running the Russian government and military are, amazingly enough, responsible for their criminal thuggery.

The Ukrainian government choosing to meet violence with violence, after having largely initiated the increase in violence in Donbass last week, is also responsible for that.

But the steps that the U.S. government, the Ukrainian government, and NATO allies took in recent months, years, and decades to get to this point, the refusal to meet perfectly reasonable Russian demands, the ever-escalating militarization — those governments remain responsible for those things too.

The RAND report hoped for nonviolent protests in Russia. That Russians now protesting their government over its latest atrocity are doing what RAND hoped for does not mean they are doing the wrong thing. It just means to watch out for the manipulation of the outcome.

If the U.S. government can orchestrate a coup in Kyiv in 2014, where ordinary people also had — as they always do — legitimate grievances, and then erase that history almost entirely within eight years, then it can also orchestrate the outcome of a Russian revolution, something it attempted unsuccessfully in 1919 and has been attempting ever since — something else that it has effectively erased from history books.