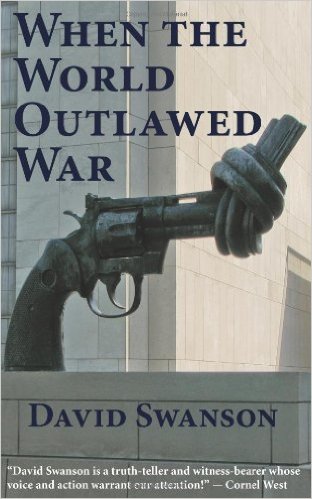 In 1929, Russia and China proposed to go to war. Governments around the world pointed out that they’d just signed and ratified the Kellogg-Briand Pact banning all war. Russia withdrew. Peace was made.

In 2022, the United States and Russia proposed to go to war. Governments around the world lined up behind the claim that one side or the other was innocent and purely defensive, because everybody knows that defensive wars are totally fine — it says so in the United Nations Charter. Nobody withdrew. No peace was made.

Yet the peace activists of the 1920s intentionally created the Kellogg-Briand Pact to ban all war including defensive war, explicitly because they’d never heard of a war where both sides didn’t claim to be acting defensively.

The trouble lies in the “improvement” on this legal system put in place by the UN Charter. You know those improvements to website software that destroy your website, or the improvements they make to F35s where the things crash into the ocean more often than before the improvements, or those new improved names for Washington D.C. football teams where the war-lust is communicated better than before? This is the kind of improvement we’re dealing with in shifting from a ban on war to a ban on bad wars.

You believe one side is right and the other wrong. You may even be correct. And it may get us all killed.

Yet the people of NATO nations don’t want war. The people of Russia don’t want war. It’s not clear that the governments of the U.S. and Russia even want war. The people of Ukraine would prefer to live. And even the President of Ukraine has gently asked Joe Biden to go rescue somebody else please. Yet nobody is able to point to a ban on war, because nobody knows there is one. And nobody is able to point to the UN Charter’s ban on threatening war, because each side is technically threatening war on behalf of the other side, claiming not that the good side will start a war but that the bad side is about to do so.

Apart from the U.S. media, does anyone actually want the war that may be coming?

Germany has expressed its opposition to this war by sending Ukraine helmets instead of guns. But Germany won’t mention the existence of the Kellogg-Briand Pact, because that would be sort of silly.

After all, the Kellogg-Briand Pact has not only been improved upon, but it also failed. I mean, look at the laws against murder, theft, rape, and war propaganda. The instant they were put down on paper (or stone tablets) those crimes vanished from the Earth. But the Kellogg-Briand Pact (while it may have radically reduced war and had a major impact on virtually ending conquest and colonialism) didn’t instantly end all wars, and so therefore wars are OK after all. QED.

Yet the Kellogg-Briand Pact remains on the books, with all relevant nations being parties to it. If we imagined starting an activist campaign to create such a treaty now, we’d be looked upon as if we belonged in padded cells. Yet it’s already been created, and we fail to even point it out. If only somebody would write a book and make a bunch of videos or something!

But why point out a law that’s ignored? We’re superior thinkers. We’re smart enough to know that the laws that count are the ones that are actually used.

Yes, but the laws that people know exist determine how people think about the topics the laws deal with.

But then could we still have truly defensive wars?

You’re missing the point. The mythology of defensive wars creates aggressive wars. The bases to defend the far corners of the Earth with defensive wars generate wars. The weapons sales fuel wars. There’s no side of any war not using U.S.-made weapons. There’s no hot-spot without the U.S. military at the root of it. The nuclear weapons are kept around out of some twisted idea of defending something or other by destroying the Earth.

Nothing would be more defensive than a new U.S. policy of limiting its military spending to no more than three times anybody else’s. Nothing would be more defensive than taping back together the shredded ABM and INF treaties, keeping promises on NATO expansion, upholding agreements in places like Iran, respecting the Minsk negotiations, joining the major human rights treaties and the International Criminal Court.

Nothing is less defensive than dumping trillions of dollars into a Department of War that you renamed the Department of Defense when the UN Charter opened up an oozing foaming loophole in the legal ban on the worst crime yet created.

Nonviolent resistance to actual attacks has proven more effective than violent resistance. We ignore this data while screaming that we must always follow “the science.” But how is this topic even relevant to the agenda of the world’s leading war initiator — a place more likely to be attacked by Fox News viewers than by the 723rd reincarnation of Hitler?

Snap out of it, folks. It will give little consolation for the conversation of some future inhabitants of the universe to run like this:

“I thought there was life on the third planet from that star.”

“As I recall, they decided that NATO expansion was more important.”

“What is NATO expansion?”

“I don’t remember, but the important thing is it was defensive.”