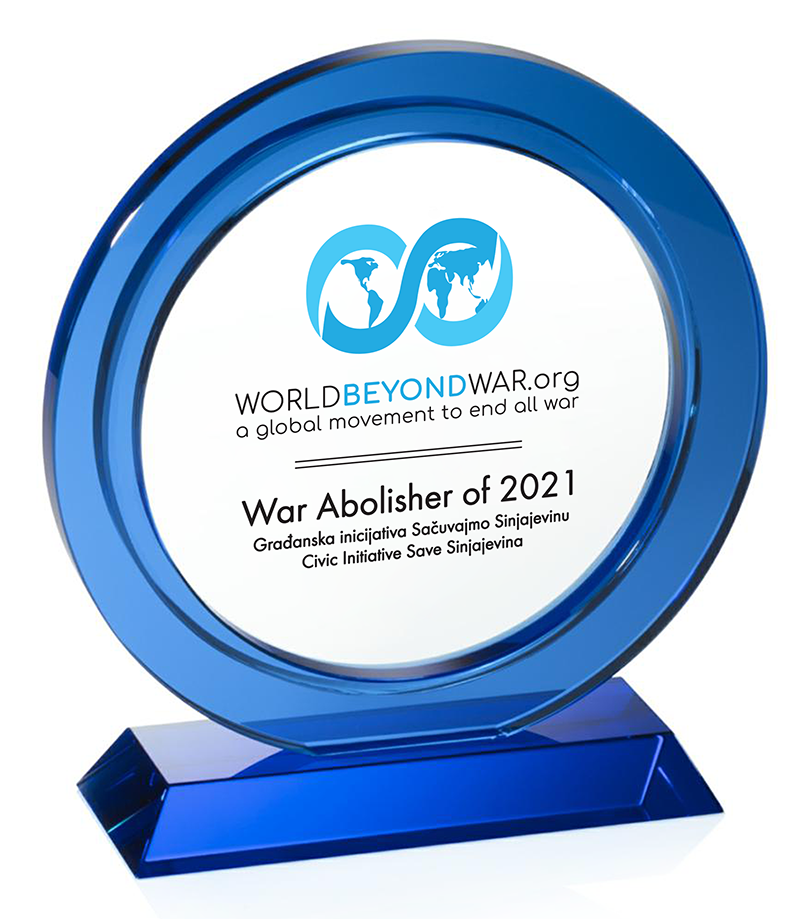 Today, September 27, 2021, World BEYOND War announces as the recipient of the War Abolisher of 2021 Award: Civic Initiative Save Sinjajevina.

An online presentation and acceptance event, with remarks from representatives of all three 2021 award recipients will take place on October 6, 2021, at 5 a.m. Pacific Time, 8 a.m. Eastern Time, 2 p.m. Central European Time, and 9 p.m. Japan Standard Time. The event is open to the public and will include presentations of three awards, a musical performance by Ron Korb, and three breakout rooms in which participants can meet and talk with the award recipients. Participation is free. Register here for Zoom link.

The purpose of the awards is to honor and encourage support for those working to abolish the institution of war itself. With the Nobel Peace Prize and other nominally peace-focused institutions so frequently honoring other good causes or, in fact, wagers of war, World BEYOND War intends its award to go to educators or activists intentionally and effectively advancing the cause of war abolition, accomplishing reductions in war-making, war preparations, or war culture. Between June 1 and July 31, World BEYOND War received hundreds of impressive nominations. The World BEYOND War Board, with assistance from its Advisory Board, made the selections.

The awardees are honored for their body of work directly supporting one or more of the three segments of World BEYOND War’s strategy for reducing and eliminating war as outlined in the book “A Global Security System, An Alternative to War.” They are: Demilitarizing Security, Managing Conflict Without Violence, and Building a Culture of Peace.

Civic Initiative Save Sinjajevina (Građanska inicijativa Sačuvajmo Sinjajevinu in Serbian) is a popular movement in Montenegro that has prevented the implementation of a planned NATO military training ground, blocking military expansion while protecting a natural environment, a culture, and a way of life. Save Sinjajevina remains vigilant to the danger of ongoing efforts to impose a base on their treasured land. (See https://sinjajevina.org )

Montenegro joined NATO in 2017 and the rumors began in 2018 of plans to impose a military (including artillery) training ground on the grasslands of Sinjajevina Mountain, the biggest mountain pasture in the Balkans and the second largest in Europe, a unique landscape of immense natural and cultural value, part of the Tara River Canyon Biosphere Reserve and surrounded by two UNESCO World Heritage sites. It is used by more than 250 families of farmers and nearly 2,000 people, while many of its pastures are used and managed communally by eight different Montenegrin tribes.

Public demonstrations against the militarization of Sinjajevina gradually arose from 2018 onwards. In September 2019, ignoring over 6,000 signatures of Montenegrin citizens that should have compelled a debate in the Montenegrin Parliament, the parliament announced the creation of a military training ground without any environmental, socio-economic, or health-impact assessments, and NATO forces arrived to train. In November 2019, an international scientific research team presented its works to UNESCO, the European Parliament, and the European Commission, explaining the bio-cultural value of Sinjajevina. In December 2019 the Save Sinjajevina association was officially launched. On October 6, 2020, Save Sinjajevina launched a petition to stop the creation of the military training ground. On October 9, 2020, farmers demonstrated at the doors of Parliament when they knew that the EU Commissioner for Neighborhood and Enlargement was at that moment in the country’s capital. Beginning October 19th, rumors started to appear about a new military training on Sinjajevina.

On October 10th, 2020, news broke and the rumors of a new military training being planned were confirmed by the Minister of the Defence. About 150 farmers and their allies set up a protest camp in the highland pastures to block soldiers’ access to the area. They formed a human chain in the grasslands and used their bodies as shields against the live ammunition of the planned military exercise. For months they stood in the way of the military moving from one side of the plateau to another, in order to prevent the military from firing and executing their drill. Whenever the military moved, so did the resisters. When Covid hit and national restrictions on gatherings were implemented, they took turns in four-person groups set in strategic spots to stop the guns from firing. When the high mountains turned cold in November, they bundled up and held their ground. They resisted for more than 50 days in freezing conditions until the new Montenegrin Minister of Defense, who was appointed on the 2nd of December, announced that the training would be cancelled.

The Save Sinjajevina movement — including farmers, NGOs, scientists, politicians, and ordinary citizens — has continued to develop local democratic control over the future of the mountains threatened by NATO, has continued to engage in public education and lobbying of elected officials, and has offered its insights through numerous fora to those working in other parts of the world to prevent the construction of, or to close existing, military bases. 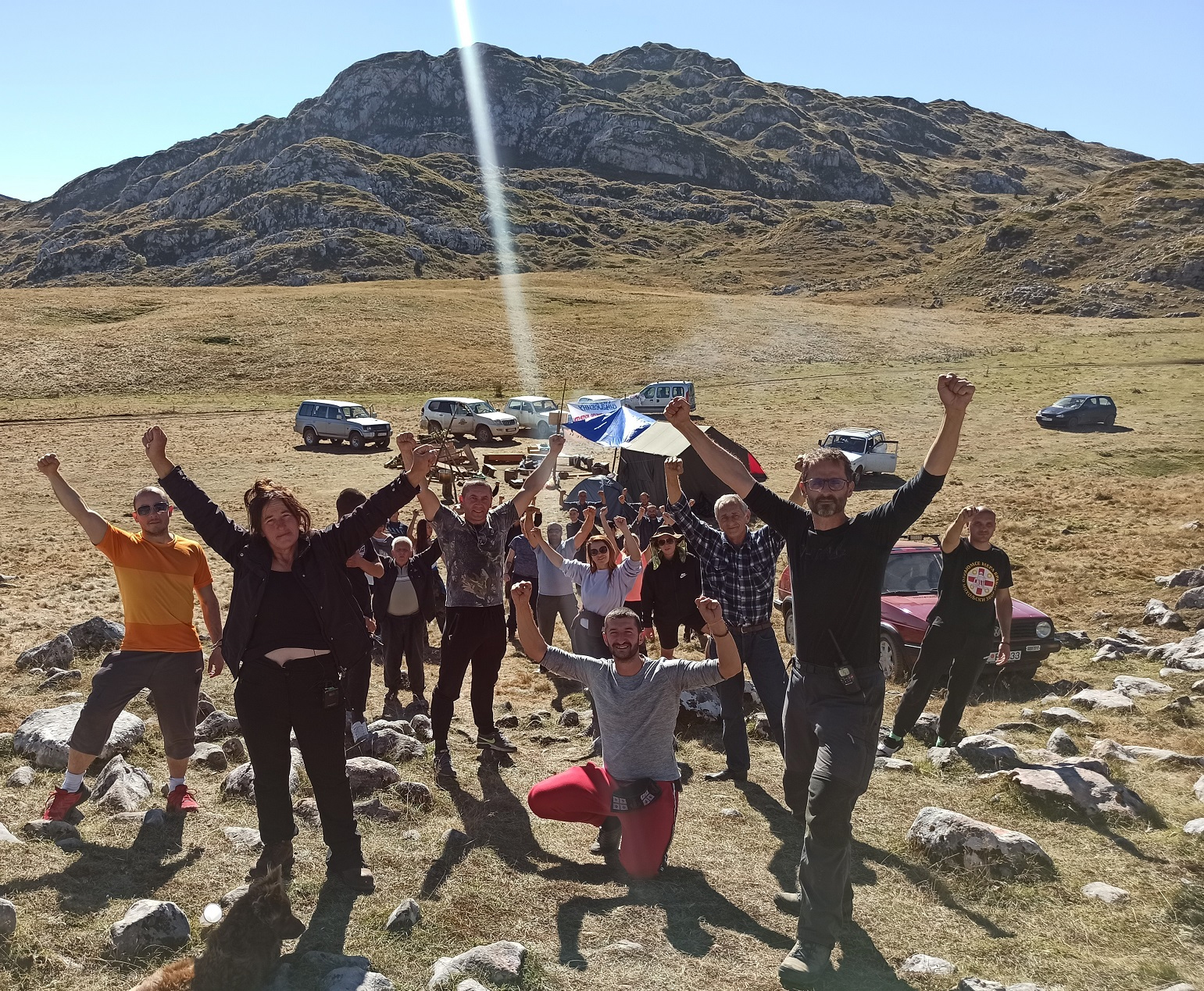 Opposing military bases is very difficult, but absolutely crucial to abolishing war. Bases destroy indigenous people’s and local communities’ ways of life and healthier ways to make a living. Stopping the harm done by bases is central to the work of World BEYOND War. The Civic Initiative Save Sinjajevina is doing the educational and nonviolent activist work that is most needed, and with stunning success and influence. Save Sinjajevina is also making necessary connections between peace, environmental protection, and local community promotion, and between peace and democratic self-governance. If war is ever fully ended, it will be because of work like that being done by the Civic Initiative Save Sinjajevina. We should all offer them our support and solidarity.

The movement has launched a new global petition at https://bit.ly/sinjajevina

Taking part in the online event on October 6, 2021, will be these representatives of the Save Sinjajevina Movement:

Milan Sekulovic, a Montenegrin journalist and civic-environmental activist, and the founder of the Save Sinjajevina movement;

Pablo Dominguez, an eco-anthropologist who specialized on pastoral mountain commons and how they work bio-ecologically and socio-culturally.

Persida Jovanović is currently pursuing a Master’s degree in political science and international relations, and she spent most of her life in Sinjajevina. She is now working together with local communities and the Save Sinjajevina association to preserve the traditional way of life and ecosystem of the mountain.