An online presentation and acceptance event, with remarks from representatives of all three 2021 award recipients will take place on October 6, 2021, at 5 a.m. Pacific Time, 8 a.m. Eastern Time, 2 p.m. Central European Time, and 9 p.m. Japan Standard Time. The event is open to the public and will include presentations of three awards, a musical performance by Ron Korb, and three breakout rooms in which participants can meet and talk with the award recipients. Participation is free. Register here for Zoom link:
https://actionnetwork.org/events/first-annual-war-abolisher-awards 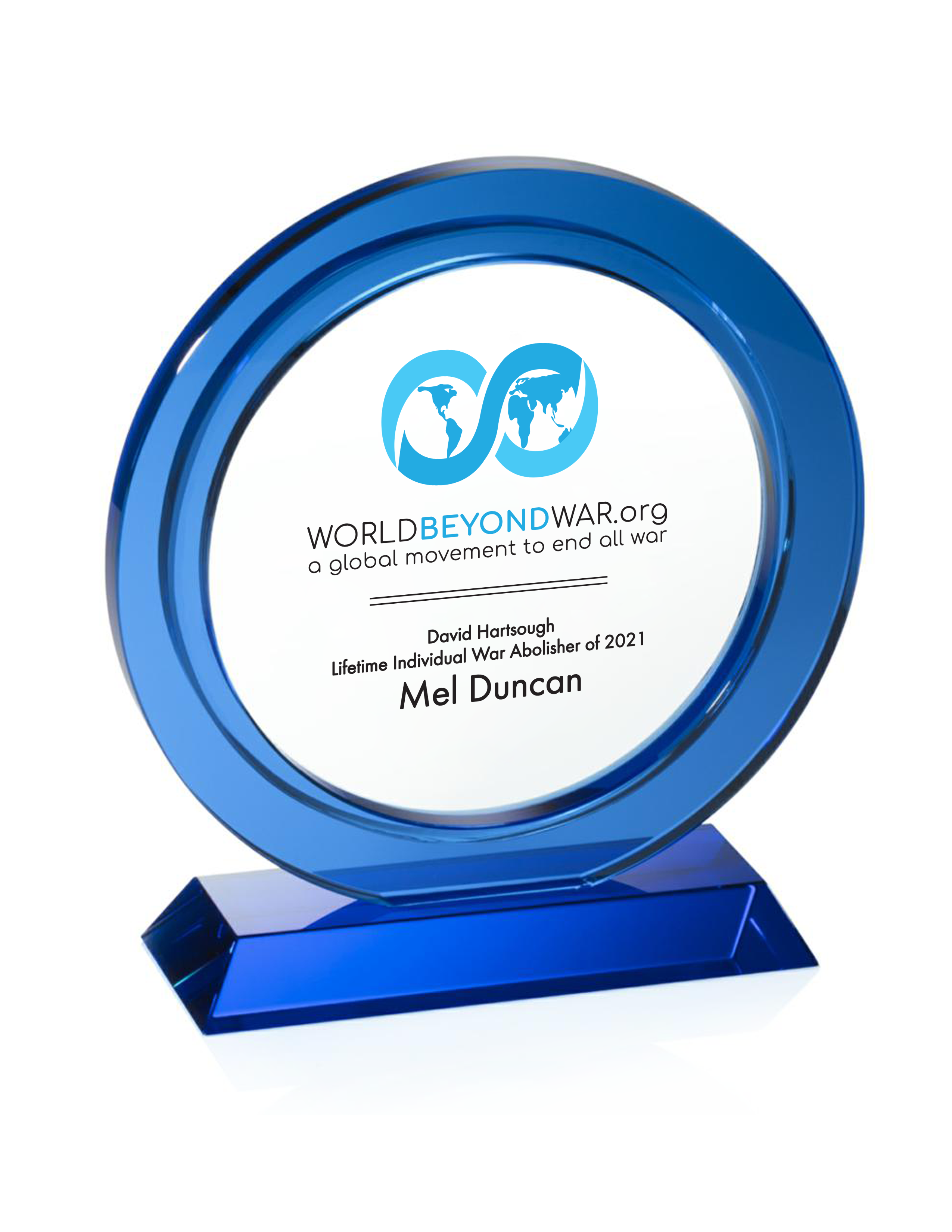 The Lifetime Organizational War Abolisher Award of 2021 will be presented to Peace Boat.

The David Hartsough Lifetime Individual War Abolisher Award of 2021 will be presented to Mel Duncan.

The War Abolisher Award of 2021 will be announced on September 27.

The recipients of all three awards will take part in the presentations event on October 6.

Joining Mel Duncan for the event on October 6 will be Ms. Rosemary Kabaki, Nonviolent Peaceforce’s Head of Mission for Myanmar.

The purpose of the awards is to honor and encourage support for those working to abolish the institution of war itself. With the Nobel Peace Prize and other nominally peace-focused institutions so frequently honoring other good causes or, in fact, wagers of war, World BEYOND War intends its award to go to educators or activists intentionally and effectively advancing the cause of war abolition, accomplishing reductions in war-making, war preparations, or war culture. Between June 1 and July 31, World BEYOND War received hundreds of impressive nominations. The World BEYOND War Board, with assistance from its Advisory Board, made the selections.

The awardees are honored for their body of work directly supporting one or more of the three segments of World BEYOND War’s strategy for reducing and eliminating war as outlined in the book “A Global Security System, An Alternative to War.” They are: Demilitarizing Security, Managing Conflict Without Violence, and Building a Culture of Peace.

Nonviolent Peaceforce builds teams of trained, unarmed, civilian protectors — men and women who are invited into conflict areas all over the globe. They work with local groups on violence deterrence with great success, demonstrating a superior alternative to war and to armed peacekeeping — achieving more effective and longer lasting results at far smaller expense. And  they advocate for the wider adoption of these approaches by groups ranging from local civil society to the UN.

Members of Nonviolence Peaceforce, bringing to mind Mohandas Gandhi’s idea of a peace army, are visibly nonpartisan and unarmed in uniforms and vehicles indicating their identity. Their teams are formed of people from all over the world including at least half from the host country and are not associated with any government. They pursue no agendas other than protection from harm and local violence prevention. They do not work — as, for example, the Red Cross at Guantanamo — in partnership with national or multi-national militaries. Their independence creates credibility. Their unarmed status creates no threat. This sometimes allows them to go where armed forces could not.

Nonviolent Peaceforce participants accompany civilians out of danger, and even stand in doorways protecting people from murder through their international, nonviolent status and prior communication with all armed groups. They accompany women to collect firewood in areas where rape is being used as a weapon of war. They facilitate the return of child soldiers. They support local groups to implement ceasefires. They create space for negotiations between warring parties. They help prevent violence during elections, including the 2020 U.S. elections. They also create a link between local peace workers and the international community.

Nonviolent Peaceforce has worked both to train and deploy more Unarmed Civilian Protectors and to educate government and institutions on the need to greatly scale-up the same approach. The choice to send people into danger without guns has demonstrated the extent to which the guns bring the danger with them.

Mel Duncan is an eloquent educator and organizer. He has represented Nonviolent Peaceforce at the United Nations where the group has been granted Consultative Status. Recent UN global reviews have cited and recommended Unarmed Civilian Protection. Although the UN continues to focus on armed “peace keeping,” the Department of Peace Operations has recently funded NP’s training, and the Security Council has included Unarmed Civilian Protection in five resolutions.

Nonviolent Peaceforce is engaged in a years-long effort to compile case studies, hold regional workshops, and bring together a global conference on good practices in Unarmed Civilian Protection, to be followed by publication of the findings. In doing so they are facilitating a community of practice among the growing number of groups implementing UCP.

The war system is altogether dependent on people believing that organized mass violence is essential for protecting the people and values they love. With his advocacy and implementation of Unarmed Civilian Protection, Mel Duncan has dedicated his life to proving that violence is not necessary for the protection of civilians, that we have alternatives to militarism that are effective. The establishment of UCP as a field of practice is more than a strategy to accelerate direct protection responses. It is part of a global movement that is triggering a paradigm shift, a different way of viewing ourselves as human beings and the world around us.

The award is named after David Hartsough, a cofounder of World BEYOND War, whose long lifetime of dedicated and inspiring peace work serves as a model. Separately from World BEYOND War, and some 15 years prior to its founding, Hartsough met Duncan and began the plans that would make them cofounders of Nonviolent Peaceforce.

If war is ever to be abolished, it will be in great measure due to the work of people like Mel Duncan who dare to dream of a better way and work to demonstrate its viability. World BEYOND War is honored to present our very first David Hartsough Lifetime Individual War Abolisher Award to Mel Duncan.

David Hartsough commented: “For those like Presidents Bill Clinton, George W. Bush, Donald Trump, and Joseph Biden who believe that when violence is inflicted on civilian populations the only alternatives are to do nothing or to start bombing the country and its people, Mel Duncan through his important work with the Nonviolent Peaceforce, has shown that that there is a viable alternative, and that is Unarmed Civilian Protection. Even the United Nations has come to understand that Unarmed Civilian Protection is a viable alternative that needs to be supported. This is a very important building block to ending the excuse for wars. Many thanks to Mel Duncan for his very important work over many years!”