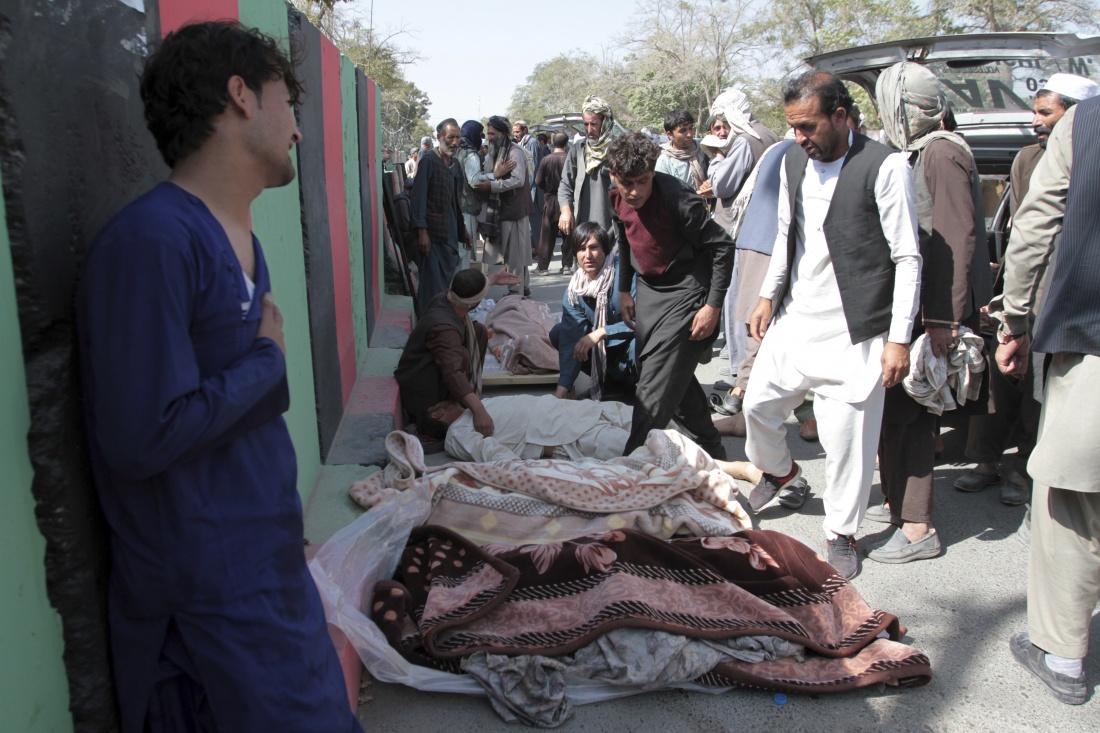 Afghan villagers stand over bodies of civilians during a protest in the city of Ghazni, west of Kabul, Afghanistan, Sept. 29, 2019. An airstrike by U.S.-led forces in eastern Afghanistan killed at least five civilians. (AP Photo/Rahmatullah Nikzad)

What do the stupid peace lovers say now?

Well, here’s what this one says:

On September 11, 2001, I said, “Well, that proves all the weapons and wars are useless or counterproductive. Prosecute crimes as crimes, and start disarming.”

When they didn’t end it, I said, “According to the Revolutionary Association of Women of Afghanistan, there’s going to be hell when they end this, and it’s going to be a worse hell the longer it takes them to end it. So, end it now!”

When they didn’t end it, I went to Kabul and met with all kinds of people and saw that they clearly had a lousy, corrupt, foreign-backed puppet government, with the looming threat of the Taliban, and neither choice was any good. “Support nonviolent civil-society,” I said. “Provide actual aid. Try democracy at home to lead by example. And (redundantly, since democracy at home would have done this) get the U.S. military the @%!%# out!”

When they still didn’t end it, and when a Congressional investigation found the top two sources of income for the Taliban to be the revived drug trade and the U.S. military, I said “If you wait additional years or decades to get the !^%& out, there’s going to be no hope left. Get the hell out now!”

When Amnesty International put ads up on bus stops in Chicago thanking NATO for the lovely war for women’s rights, I pointed out that bombs blow up women the same as men, and marched to protest NATO.

I asked people in Afghanistan, and they said the same thing.

When Obama pretended to get out, I said, “Really get out, you lying scheming fraud!”

When Trump got elected promising to get out and then didn’t, I said, “Really get out, you lying scheming fraud!”

(When Hillary Clinton failed to get elected, and evidence suggested that she’d have won had she credibly promised to end the wars, I said, “Do us all a favor and retire for godsake!”)

When they STILL didn’t end it, I said, again, “According to the Revolutionary Association of Women of Afghanistan, there’s going to be hell when they end this, and it’s going to be a worse hell the longer it takes them to end it. So, end it now!”

When Biden pretended to get out while promising to keep troops there and to increase the bombings, I said, “Really get out, you lying scheming fraud!”

When Biden claimed the war was some sort of success, I pointed out how it had spread anti-U.S. terrorism across half the globe, spawned more wars, murdered countless people, devastated the natural environment, eroded the rule of law and civil liberties and self-governance, and cost trillions of dollars.

When the U.S. government refused to abide by agreements, refused to stop bombing, refused to give credible negotiation or compromise a chance, refused to support the rule of law around the world or lead by example, refused to stop shipping weapons into the region, refused to even acknowledge that the Taliban is using U.S.-made weapons, but finally claimed it would get its troops out, I expected that U.S. media outlets would develop anew a strong interest in the rights of Afghan women. I was right.

But the U.S. government, according to its own reporting, accounts for 66% of all the weapons exported to the least democratic quintile of nations on earth. Of the 50 most oppressive governments identified by a U.S.-government-funded study, the U.S. arms 82% of them. Here they are: Afghanistan, Algeria, Angola, Azerbaijan, Bahrain, Brunei, Burundi, Cambodia, Cameroon, Central African Republic, Chad, China, Democratic Republic of Congo (Kinshasa), Republic of Congo (Brazzaville), Djibouti, Egypt, Equatorial Guinea, Eritrea, Eswatini (formerly Swaziland), Ethiopia, Gabon, Iraq, Kazakhstan, Libya, Mauritania, Nicaragua, Oman, Qatar, Rwanda, Saudi Arabia, Sudan, Syria, Tajikistan, Thailand, Turkey, Turkmenistan, Uganda, United Arab Emirates, Uzbekistan, Vietnam, Yemen. Israel’s government, notorious for its violent oppression of Palestinian people, is not on that list (it’s a U.S.-funded list) but is the top recipient of “aid” funding for U.S. weapons from the U.S. government. Some women live in Palestine.

The Stop Arming Human Rights Abusers Act (H.R.4718) would prevent U.S. weapons sales to other nations that are in violation of international human rights law or international humanitarian law. During the last Congress, the same bill, introduced by Congresswoman Ilhan Omar, gathered a grand total of zero cosponsors.

What do you notice about that list of nations? One of them, Afghanistan, was on the list of oppressive governments before the Taliban threatened to take it over. And the other 40 are of truly minimal interest to the U.S. corporate media, much less to any of the “BUT THE WOMEN!” crowd out there moaning in agony that a war might end.

The same crowd seems to have no objection to the proposal moving through the U.S. Congress to force U.S. women at age 18 to register for a military draft that would force them against their will to kill and die in more of these wars.

So, what would I propose that the U.S. government do for the women and men and children of Afghanistan now, regardless of horrible decisions in the past that it’s obviously too late to undo and just silly and offensive to rehash like this?

1. Until it can reform itself into an entity capable of benevolent action, not a goddamned thing.

2. Stop encouraging the Taliban to think that it can become a model U.S. client state in a few years if it’s mean and nasty enough, by ceasing to arm and train and fund brutal dictatorships all over the globe.

5. Move 20% of the U.S. military budget into useful things each year for five years.

6. Move 10% of that rededicated funding into providing no-strings-attached aid and encouragement to the most law-abiding and honest-to-god small-d democratic poor nations on the planet.

7. Take a hard look at the U.S. government itself, understand the powerful case that the U.S. government could make for bombing itself were it not itself, and take serious steps to remove the bribery from the election system, establish fair public funding and media coverage for elections, and remove gerrymandering, the filibuster, and as soon as possible the United States Senate.

8. Free, apologize to, and thank every whistleblower who’s told us what the U.S. government was doing in Afghanistan for the past 20 years. Consider why we needed whistleblowers to tell us.

9. Prosecute or free and apologize to every prisoner at Guantanamo, close the base, and get out of Cuba.

10. Get out of the way of the International Criminal Court’s prosecution of Taliban crimes in Afghanistan, as well as its prosecution of crimes committed there by the Afghan government, and by the militaries of the United States and its junior partners.

11. Swiftly become an entity that can credibly comment on horrors being committed by the Taliban, by — among other things — caring enough about the horrors coming to all of humanity to invest heavily in ending the destruction of the Earth’s climate and ending the existence of nuclear weapons.