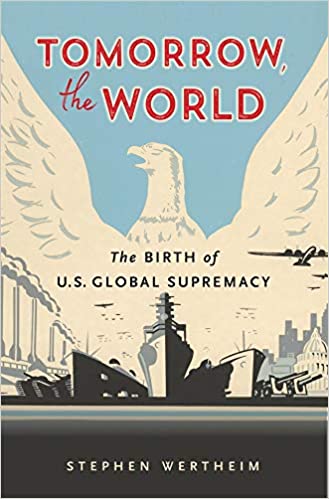 Stephen Wertheim’s Tomorrow, The World examines a shift in elite U.S. foreign-policy thinking that took place in mid-1940. Why in that moment, a year and a half before the Japanese attacks on the Philippines, Hawaii, and other outposts, did it become popular in foreign-policy circles to advocate for U.S. military domination of the globe?

In school text book mythology, the United States was full of revoltingly backward creatures called isolationists at the time of World War I and right up through December 1941, after which the rational adult internationalists took command (or we’d all be speaking German and suffering through the rigged elections of fascistic yahoos, unlike this evening).

In fact, the term “isolationist” wasn’t cooked up until the mid-1930s and then only as a misleading insult to be applied to people who wished for the U.S. government to engage with the world in any number of ways from treaties to trade that didn’t include militarism. Anti-isolationism was and is a means of ridiculously pretending that “doing something” means waging war, supporting NATO, and promoting the “responsibility to protect,” while anything else means “doing nothing.”

There were distinctions in the 1920s between those who favored the League of Nations and World Court and those who didn’t. But neither group favored coating the planet with U.S. military bases, or extending even the most vicious conception of the Monroe Doctrine to the other hemisphere, or replacing the League of Nations with an institution that would falsely appear to establish global governance while actually facilitating U.S. domination. Pre-1940 internationalists were, in fact, imperfect U.S. nationalists. They, as Wertheim writes, “had the capacity to see the United States as a potential aggressor requiring restraint.” Some, indeed, didn’t need the word “potential” there.

What changed? There was the rise of fascism and communism. There was the notion that the League of Nations had failed. There was the serious failure of disarmament efforts. There was the belief that whatever came out of WWII would be dramatically different. In September 1939, the Council on Foreign Relations began making plans to shape the post-war (yet permawar) world. The Roosevelt White House into 1940 was planning for a post-war world that held a balance of power with the Nazis. Ideas of disarmament, at least for others, were still very much a part of the thinking. “Weapons dealer to the world” was not a title that it was ever suggested that the United States strive for.

Wertheim sees a turning point in the German conquest of France. Change came swiftly in May-June, 1940. Congress funded the creation of the world’s biggest navy and instituted a draft. Contrary to popular mythology, and propaganda pushed by President Roosevelt, nobody feared a Nazi invasion of the Americas. Nor was the United States dragged kicking and screaming into its moral responsibility to wage global permawar by the atrocious domestic policies of the Nazis or any mission to rescue potential victims from Nazi genocide. Rather, U.S. foreign policy elites feared the impact on global trade and relations of a world containing a Nazi power. Roosevelt began talking about a world in which the United States dominated only one hemisphere as imprisonment.

The United States needed to dominate the globe in order to exist in the sort of global order it wanted. And the only global order it wanted was one it dominated. Did U.S. planners become aware of this need as they watched events in Europe? Or did they become aware of its possibility as they watched the U.S. government build weapons and the U.S. president acquire new imperial bases? Probably some of each. Wertheim is right to call our attention to the fact that U.S. officials didn’t talk about militarily dominating the whole globe prior to 1940, but was there ever a time they talked about dominating anything less than what they had the weapons and troops to handle? Certainly the voices had not all been monolithic, and there was always an anti-imperialist tradition, but did it ever give much back to those it had dispossessed until after WWII when airplanes and radios developed a new sort of empire (and some colonies were made states but others more or less liberated)?

The U.S. government and its advisers didn’t just discover that they could rule the world and that they needed to rule the world, but also that — in the words of General George V. Strong, chief of the Army’s War Plans Division — Germany had demonstrated the “tremendous advantage of the offense over the defense.” The proper defensive war was an aggressive war, and an acceptable goal of that was what Henry Luce called living space and Hitler called Lebensraum. U.S. elites came to believe that only through war could they engage in proper trade and relations. One can treat this as a rational observation based on the growth of fascism, although some of the same people making the observation had fascistic tendencies, the problem with Germany seems to have existed for them only once it had invaded other nations that were not Russia, and there is little doubt that had the United States lived sustainably, locally, egalitarianly, contentedly, and with respect for all humanity, it could not have observed a need for permawar in the world around it — much less gone on observing it for 75 years.

In early 1941, a U.S. political scientist named Harold Vinacke asked, “When the United States has its thousands of airplanes, its mass army, properly mechanized, and its two-ocean navy, what are they to be used for?” Officials have been asking the same right up through Madeline Albright and Donald Trump, with the answer generally being found to be as self-evident as other patriotic “truths.” By summertime 1941, Roosevelt and Churchill had announced the future organization of the world in the Atlantic Charter.

If hypocrisy is the compliment that vice pays to virtue, there remained some virtue in U.S. society and its conception of foreign policy at the time of WWII, because a major focus of post-war planners was how to sell global domination to the U.S. public (and incidentally the world, and perhaps most importantly themselves) as being something other than what it was. The answer, of course, was the United Nations (along with the World Bank, etc.). Undersecretary of State Sumner Welles described the design of the United Nations thus: “what we required was a sop for the smaller states: some organization in which they could be represented and made to feel themselves participants.” In Roosevelt’s words before the creation of the U.N., all nations but four, in a future global organization, would merely “blow off steam.”

Roosevelt also proposed that the existence of such a phony organization would allow it to declare war instead of the U.S. Congress, meaning that a U.S. president would be able to launch wars at will — something like what we’ve seen for the past 75 years with NATO occasionally having filled in for a malfunctioning United Nations.

Roosevelt believed that the United States signed up for global policeman when it defeated Hitler. Neither Roosevelt nor Wertheim mentions that the Soviet Union did 80% of defeating Hitler, after having done about 0% of creating him.

But surely the job of world cop can be resigned, no matter how one got into it. The question now is how. The financial and bureaucratic and media and campaign-corruption interests all work against dismantling the permawar military, just as does the ideology of anti-“isolationism.” But it certainly cannot hurt to be aware of the dishonesty in the ideology and of the fact that it was not always with us.