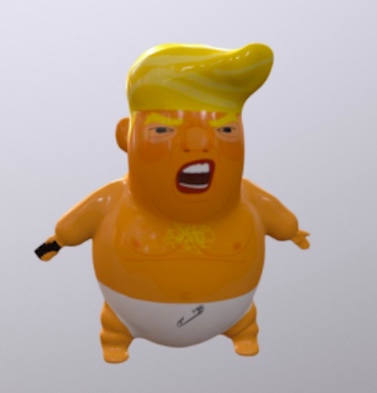 O say can you see by the rot cellulite. . .what so cynically we made. . .while Trump’s teeth were gleaming. . .Whose broad ass and psych scars were so putrid with spite. . .And the shithead’s mad glare. . .the shellac holding his hair. . .gave voice to all blight. . .and our flag was threadbare. . .

Let’s see. . .Yes, now that the Reaper is really reapin’, really groovin’, really “rockin,” as Little President Jared said our “economy” will be doing by July. . .now is the time to reopen everyfuckingthing. Hey, baby, it’s like Bush said after 9/11—“go shopping!” Reopen all those coffee joints, all those small businesses that received zero aid from the so-called federal government because it was all lapped up by the long, lascivious, lupine tongues of the rich, like skimming fat off a stew.

Yeah! Reopen the beaches, the forests, the mountains, the oceans, the deserts—right away! Amerrygun shitizens must have their playgrounds to shit in, despoil with empty beer cans, Wild Turkey bottles, styrofoam cups, used giant ribbed condoms, discarded thongs, and the glorious patriotic cornucopia of oil-based junk that will eventually make its way into the oceans and everything you eat. Hurry!

Reopen the restaurants! Set up the chairs and open the booths for the great American hiney to squeeze into so funseekers can say cool and awesome and shovel down more fat, grease, sugar. . .in order to fart out great, glorious clouds of human methane recently proven to be a major contributor to global warming. Yes! What says pro-life more than joyfully expelled gas? Say hallelujah! Fart one for Jesus!

Reopen! Let your inspiration be the sight of President Adipose touring a “mask-making facility” in Arizona, while, I swear to Vishnu, “Live and Let Die” played in the background. At first I thought it was scintillating irony, then I remembered that Trump lumpenproleteriat played this same song at black masses while anointing their Satan with analingus and other sacred traditions. The grimacing bastard must really like the line, “What does it matter to yuh. . .When you gotta job tuh do, you gotta do it well. . .you gotta give the other fella hellllll. . .”

Go ahead, laugh: I used to actually believe that this country, no matter what monstrous errand boy for the corporatocracy was “elected,” would, in times of extreme crisis, “rally together,” as the Hallmark cardworthy cliché goes…

For the rest of this article, contributed to ThisCantBeHappening! by RIP RENSE, please go to:  https://thiscantbehappening.net/let-the-fish-fry-proceed/