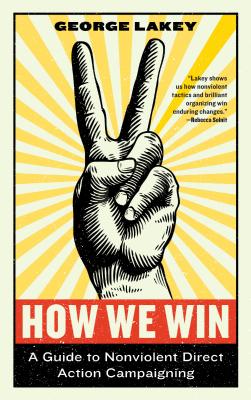 By David Swanson, Executive Director of World BEYOND War
​https://worldbeyondwar.org/howwewin

George Lakey’s new book is called How We Win: A Guide to Nonviolent Direct Action Campaigning. On its cover is a drawing of a hand holding up two fingers in what is more often considered a peace sign than a victory sign, but I suppose it is meant as both.

Perhaps nobody is better qualified to write such a book, and it’s hard to imagine one better written. Lakey co-wrote a similar book in the 1960s and has been studying the matter ever since. He doesn’t just draw lessons from the Civil Rights movement, wasn’t just there at the time, but was applying lessons from earlier actions to training activists at the time. His new book provides — at least for me — new insights even about the very most familiar and often discussed nonviolent actions of the past (as well as lots of new rarely discussed actions). I’d recommend that anyone interested in a better world get this book immediately.

However, out of the countless examples of past actions explored in this book, there are — as is absolutely typical — a very few passing references to anything related to war and peace. There’s the usual complaint that marches have been tried when an (unspecified) targeted and escalating and enduring nonviolent action campaign might have had a better impact. There are two sentences praising the 12-year-long successful encampment at Greenham Common opposing a U.S. nuclear base in England. There are three sentences suggesting that a campaign that has protested Lockheed Martin’s manufacture of nuclear weapons for four decades has not known how to attract enough participants. There’s a portion of a sentence recommending the film The Boys Who Said NO! And that’s about it.

But can we read this wonderful book, and tease out some lessons that might apply to the work of ending war? Can we come up with actions that make clear to observers our goals and the case for them, that reveal secrets and expose myths, that target those who can make changes, that endure and escalate and appeal to wider participation, that are both global or national and local.

World BEYOND War has been working toward a war abolition movement using campaigns aimed at divestment from weapons (with some success) and at closing bases (without much success yet in closing bases, but success in educating and recruiting), but World BEYOND War has also made part of its work the exposure of the myths that war can be inevitable, necessary, beneficial, or just. Can we combine these things?

A few ideas come to mind. What if people in the United States and Russia were able to vote in huge numbers in an independently created referendum on disarmament or ending sanctions or ending hostile and slanderous rhetoric? What if a group of Iranians and representatives of the United States and numerous other nations were to agree on a peace treaty of our own creation ending sanctions and threats, or on the 2015 agreement? What if U.S. cities and states were pressured to answer to the public and defy sanctions?

What if large numbers of U.S. people, representing and communicating with localities back home, were to go to Iraq or the Philippines to join with the people and governments of those places in asking the U.S. troops to depart? What if exchanges, including student exchanges, were set up between the U.S. and the places where bases are protested, with the big message being, for example, “South Korea Welcomes Unarmed Americans!”

What if localities were brought to formally adopt holidays celebrating wars that didn’t happen, prominently remembering all the rhetoric that had declared those wars necessary and inevitable? What if each locality around the world and around the United States where al Qaeda planned anything prior to 9/11 were to formally sign an apology to Afghanistan for the U.S. government’s refusal to put bin Laden on trial in a third country?

What if elaborately outfitted actors portraying such recipients of U.S. weapons, U.S. military training, and U.S. military funding as King Hamad bin Isa Al Khalifa of Bahrain, or His Majesty Paduka Seri Baginda Sultan Haji Hassanal Bolkiah Mu’izzaddin Waddaulah of Brunei, or President Abdel Fattah el-Sisi of Egypt, or President Teodoro Obiang Nguema Mbasogo of Equatorial Guinea (there are dozens, you could have a new brutal dictator every week or month) were to show up at local branches of U.S. weapons companies, or at their alma maters where they were trained in brutality (the General Staff College at Fort Leavenworth in Kansas, the Royal Military Academy Sandhurst in the United Kingdom, the United States Army War College in Carlisle, Pennsylvania, etc.) and demand that the corporation or the school NOT endorse Congresswoman Ilhan Omar’s Stop Arming Human Rights Abusers Act?

Are there ways, in other words, in which an antiwar effort that’s already dedicated to nonviolence and teamwork and sacrifice and education and broad appeal can succeed at being both global and local, at aiming for a world at peace but also at short-term achievable changes? I encourage reading George Lakey’s book with these questions in mind and reporting back here on your answers.
​https://worldbeyondwar.org/howwewin​