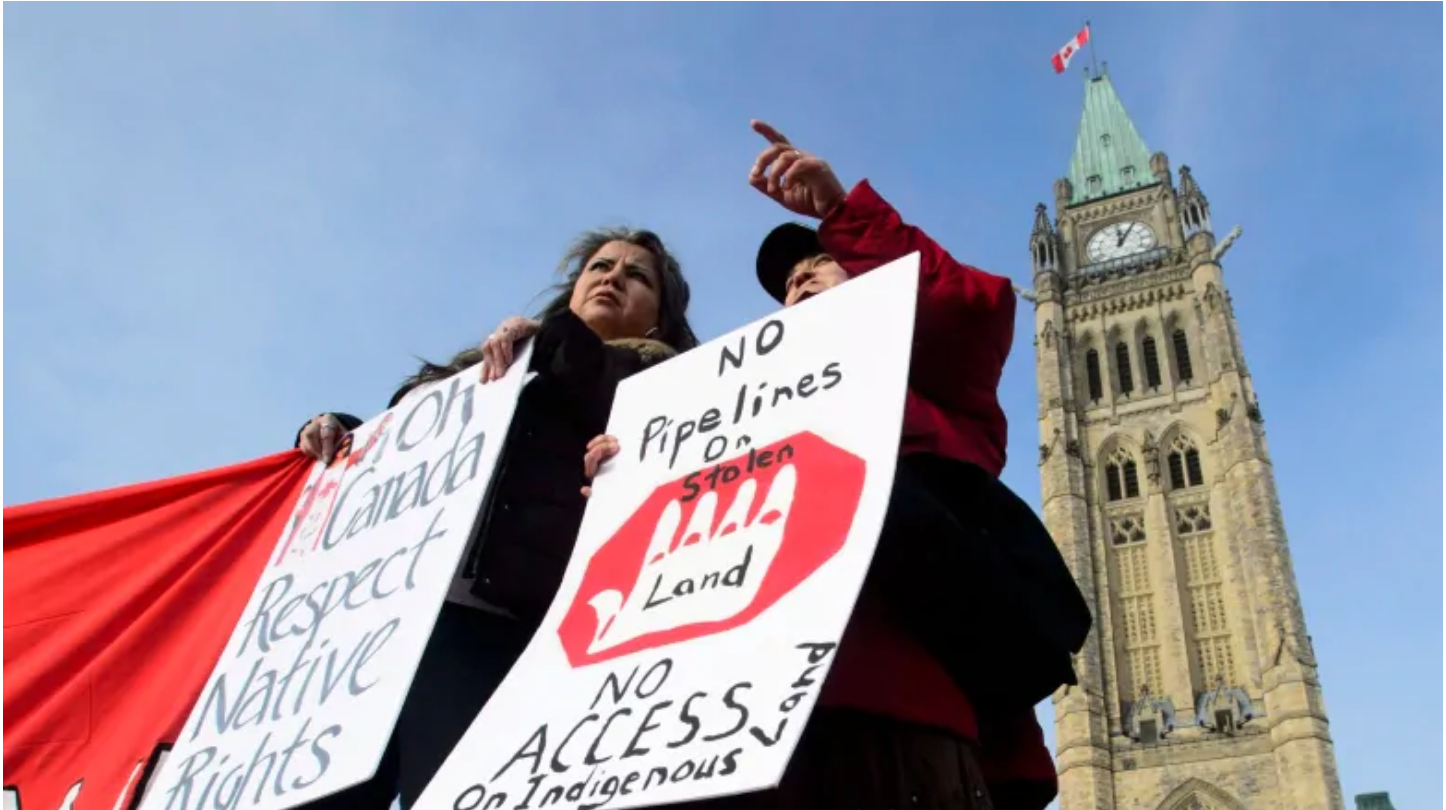 By David Swanson, Executive Director of World BEYOND War

Indigenous people in Canada are giving the world a demonstration of the power of nonviolent action. The justness of their cause — defending the land from those who would destroy it for short term profit and the elimination of a habitable climate on earth — combined with their courage and the absence on their part of cruelty or hatred, has the potential to create a much larger movement, which is of course the key to success.

This is a demonstration of nothing less than a superior alternative to war, not just because the war weapons of the militarized Canadian police may be defeated by the resistance of the people who have never been conquered or surrendered, but also because the Canadian government could accomplish its aims in the wider world better by following a similar path, by abandoning the use of war for supposedly humanitarian ends and making use of humanitarian means instead. Nonviolence is simply more likely to succeed in domestic and international relations than violence. War is not a tool for preventing but for facilitating its identical twin, genocide.

Of course, the indigenous people in “British Columbia,” as around the world, are demonstrating something else as well, for those who care to see it: a way of living sustainably on earth, an alternative to earth-violence, to the raping and murdering of the planet — an activity closely linked to the use of violence against human beings.

The Canadian government, like its southern neighbor, has an unacknowledged addiction to the war-oil-genocide problem. When Donald Trump says he needs troops in Syria to steal oil, or John Bolton says Venezuela needs a coup to steal oil, it’s simply an acknowledgement of the global continuation of the never-ended operation of stealing North America.

Look at the gas-fracking invasion of unspoiled lands in Canada, or the wall on the Mexican border, or the occupation of Palestine, or the destruction of Yemen, or the “longest ever” war on Afghanistan (which is only the longest ever because the primary victims of North American militarism are still not considered real people with real nations whose destruction counts as real wars) , and what do you see? You see the same weapons, the same tools, the same senseless destruction and cruelty, and the same massive profits flowing into the same pockets of the same profiteers from blood and suffering — the corporations that will be shamelessly marketing their products at the CANSEC weapons show in Ottawa in May.

Much of the profits these days comes from distant wars fought in Africa, the Middle East, and Asia, but those wars drive the technology and the contracts and the experience of war veterans that militarize the police in places like North America. The same wars (always fought for “freedom,” of course) also influence the culture toward greater acceptance of the violation of basic rights in the name of “national security” and other meaningless phrases. This process is exacerbated by the blurring of the line between war and police, as wars become endless occupations, missiles become tools of random isolated murder, and activists — antiwar activists, antipipeline activists, antigenocide activists — become categorized with terrorists and enemies.

Not only is war over 100 times more likely where there is oil or gas (and in no way more likely where there is terrorism or human rights violations or resource scarcity or any of the things people like to tell themselves cause wars) but war and war preparations are leading consumers of oil and gas. Not only is violence needed to steal the gas from indigenous lands, but that gas is highly likely to be put to use in the commission of wider violence, while in addition helping to render the earth’s climate unfit for human life. While peace and environmentalism are generally treated as separable, and militarism is left out of environmental treaties and environmental conversations, war is in fact a leading environmental destroyer. Guess who just pushed a bill through the U.S. Congress to allow both weapons and pipelines into Cyprus? Exxon-Mobil.

Solidarity of the longest victims of western imperialism with the newest ones is a source of great potential for justice in the world.

But I mentioned the war-oil-genocide problem. What does any of this have to do with genocide? Well, genocide is an act “committed with intent to destroy, in whole or in part, a national, ethnical, racial, or religious group.” Such an act can involve murder or kidnapping or both or neither. Such an act can “physically” harm no one. It can be any one, or more than one, of these five things:

Numerous top Canadian officials over the years have stated clearly that the intention of Canada’s child-removal program was to eliminated Indigenous cultures, to utterly remove “the Indian problem.” Proving the crime of genocide does not require the statement of intent, but in this case, as in Nazi Germany, as in today’s Palestine, and as in most if not all cases, there is no shortage of expressions of genocidal intent. Still, what matters legally is genocidal results, and that is what one can expect from stealing people’s land to frack it, to poison it, to render it uninhabitable.

When the treaty to ban genocide was being drafted in 1947, at the same time that Nazis were still being put on trial, and while U.S. government scientists were experimenting on Guatemalans with syphilis, Canadian government “educators” were performing “nutritional experiments” on Indigenous children — that is to say: starving them to death. The original draft of the new law included the crime of cultural genocide. While this was stripped out at the urging of Canada and the United States, it remained in the form of item “e” above. Canada ratified the treaty nonetheless, and despite having threatened to add reservations to its ratification, did no such thing. But Canada enacted into its domestic law only items “a” and “c” — simply omitting “b,” “d,” and “e” in the list above, despite the legal obligation to include them. Even the United States has included what Canada omitted.

CANSEC is one of the largest annual weapons shows in North America. Here’s how it describes itself, a list of exhibitors, and a list of the members of the Canadian Association of Defence and Security Industries which hosts CANSEC.

CANSEC facilitates Canada’s role as a major weapons dealer to the world, and the second biggest weapons exporter to the Middle East. So does ignorance. In the late 1980s opposition to a forerunner of CANSEC called ARMX created a great deal of media coverage. The result was a new public awareness, which led to a ban on weapons shows on city property in Ottawa, which lasted 20 years.

The gap left by media silence on Canadian weapons dealing is filled with misleading claims about Canada’s supposed role as a peacekeeper and participant in supposedly humanitarian wars, as well as the non-legal justification for wars known as “the responsibility to protect.”

There is little overlap between the wealthy weapons-dealing nations and the nations where wars are waged. U.S. weapons are often found on both sides of a war, rendering ridiculous any pro-war moral argument for those weapons sales.

CANSEC 2020’s website boasts that 44 local, national, and international media outlets will be attending a massive promotion of weapons of war. The International Covenant on Civil and Political Rights, to which Canada has been a party since 1976, states that “Any propaganda for war shall be prohibited by law.”

The weapons exhibited at CANSEC are routinely used in violation of laws against war, such as the UN Charter and the Kellogg-Briand Pact — most frequently by Canada’s southern neighbor. CANSEC may also violate the Rome Statute of the International Criminal Court by promoting acts of aggression. Here’s a report on Canadian exports to the United States of weapons used in the 2003-begun criminal war on Iraq. Here’s a report on Canada’s own use of weapons in that war.

The weapons exhibited at CANSEC are used not only in violation of laws against war but also in violation of numerous so-called laws of war, that is to say in the commission of particularly egregious atrocities, and in violation of the human rights of the victims of oppressive governments. Canada sells weapons to the brutal governments of Bahrain, Egypt, Jordan, Kazakhstan, Oman, Qatar, Saudi Arabia, Thailand, United Arab Emirates, Uzbekistan, and Vietnam.

In 2015, Pope Francis remarked before a joint session of the United States Congress, “Why are deadly weapons being sold to those who plan to inflict untold suffering on individuals and society? Sadly, the answer, as we all know, is simply for money: money that is drenched in blood, often innocent blood. In the face of this shameful and culpable silence, it is our duty to confront the problem and to stop the arms trade.”

An international coalition of individuals and organizations will be converging on Ottawa in May to say No to CANSEC with a seris of events called NoWar2020.

This month two nations, Iraq and the Philippines, have told the United States military to get out. This happens more often than you might think. These actions are part of the same movement that tells the Canadian militarized police to get out of lands they have no rights in. All actions in this movement can inspire and inform all others.