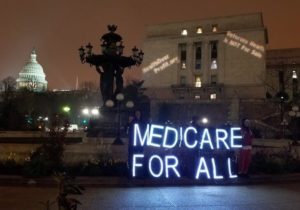 It is increasingly clear that the wagons have circled both in the Democratic National Committee and in the news media to shut down any possibility of a national health plan as proposed by Physicians for a National Health Program (PNHP) or Democratic presidential candidate Bernie Sanders.

The media for their part, keep touting — almost a year and a half before Election day, and just under a year after next year’s Democratic primary voting and caucusing, that two “centrists” (who should be called the Establishment candidates, both neo-Liberals in the Clinton mold) — Joe Biden and Kamala Harris as the “leading candidates” for the Democratic presidential nomination.

Biden is quoted favorably for perpetrating the lie that establishing a new “single-payer” program of government insurance covering everyone would mean “starting from scratch” and taking away everyone’s current employer-funded, or Obamacare subsidized health insurance.

Meanwhile Harris, who was against Medicare for All before she was for it, and who now talks about “funding” it with taxes on Wall Street, is treated like the voice of reason, when in fact she’s just blowing smoke and confusing the issue deliberately.

So let’s get this straight.  Funding a program of what Bernie Sanders and health care activists call Medicare for All, would cost an estimated $30 trillion over the next 10 years (that last bit about over ten years tends to get left out of articles criticizing the plan), as in this report in the National Review.  But it’s not just right wing media that obfuscate.  In a CNN interview of Harris, reporter Kyung Lah just says Sen. Sanders says the plan will  “require a middle class tax cut” to fund.

But Lah doesn’t say, and Harris, who is smart enough to know, but doesn’t want to admit publicly, that the US healthcare system today already costs more than $3 trillion per year and will cost much more than $30 trillion over the next 10 years.

Here’s the real story.  As things stand presently, health care costs in the US account for 18% of total US Gross Domestic Product. That is to say, 18 % of all economic transactions in the US, government and private sector, go for medical care. That’s 18% of $21.1trillion in 1019, or about $3.7 trillion. In constant dollars over the course of the next decade that would be $3.7 trillion.

That figure includes the cost of Medicare for the elderly and disabled — a program that is already funded by taxes paid by individuals and their employers (the federal budget for Medicaid, financed by those taxes, is about $600 billion this year).  Add to that the amount for Medicaid, which provides health benefits for one-in-five Americans unable to obtain private insurance and which is funded by the federal government and the states (also about $600 billion this year), and taxpayers are already funding some $1.2 trillion of the US health care bill through taxation…