By David Swanson, Executive Director of World BEYOND War, June 21, 2019

A new film by Will Watson, called Soldiers Without Guns, ought to shock a great many people — not because it utilizes a yet more gruesome form of violence or bizarre form of sex (the usual shockers in movie reviews), but because it recounts and shows us a true story that contradicts the most basic assumptions of politics, foreign policy, and popular sociology.

Bougainville Island was a paradise for millennia, inhabited sustainably by people who never caused the rest of the world the slightest trouble. Western empires fought over it, of course. Its name is that of a French explorer who named it for himself in 1768. Germany claimed it in 1899. In World War I, Australia took it. In World War II, Japan took it. Bougainville returned to Australian domination after the war, but the Japanese left piles of weapons behind — possibly the worst of the many forms of pollution, destruction, and lingering effects a war can leave in its wake.

The people of Bougainville wanted independence, but were made part of Papua New Guinea instead. And in the 1960s the most horrible thing happened — worse for Bougainville than anything it had previously experienced. This event transformed Western colonial behavior. It was not a moment of enlightenment or generosity. It was the tragic discovery, right in the middle of the island, of the largest supply of copper in the world. It wasn’t harming anyone. It could have been left right where it was. Instead, like the Cherokees’ gold or the Iraqis’ oil, it rose up like a curse spreading horror and death.

An Australian mining company stole the land, drove the people off it, and began destroying it, creating in fact the biggest hole on the planet. The Bougainvilleans responded with what some might consider reasonable demands for compensation. The Australians refused, laughed in fact. Sometimes the most apocalyptically doomed perspectives ward off alternatives with contemptuous laughter.

Here, perhaps, was a moment for courageous and creative nonviolent resistance. But people tried violence instead — or (as the misleading saying goes) “resorted to violence.” The Papua New Guinean military responded to that by killing hundreds. The Bougainvilleans responded to that by creating a revolutionary army and waging war for independence. It was a righteous, anti-imperialist war. In the film we see images of fighters of just the sort still romanticized by some all over the world. It was a horrific failure.

The mine ceased operating in 1988. Workers fled back to Australia for their safety. Mine profits were reduced, not by compensation to the people of the land, but by 100%. That may not sound like such a failure. But consider what happened next. The Papua New Guinean military escalated the atrocities. Violence spiraled upward. Then the military created a naval blockade of the island and otherwise abandoned it. This left behind impoverished, disorganized, heavily armed people with belief in the power of violence. That was a recipe for anarchy, so much so that some invited the military back, and a bloody civil war raged for almost 10 years, killing men, women, and children. Rape was a common weapon. Poverty was extreme. Some 20,000 people, or one-sixth of the population, were killed. Some brave Bougainvilleans smuggled medicine and other supplies in from the Solomon Islands, through the blockade.

Fourteen times peace negotiations were attempted and failed. A foreign “intervention” didn’t look like a viable option, as foreigners were distrusted as exploiters of the land. Armed “peace keepers” would have simply added arms and bodies to the war, as armed “peace keepers” have often done around the world for several decades now. Something else was needed.

In 1995 women of Bougainville made plans for peace. But peace did not come easily. In 1997 Papua New Guinea made plans to escalate the war, including by hiring a mercenary army based in London called Sandline. Then someone in an unlikely position suffered a fit of sanity. The general in charge of the Papua New Guinea military decided that adding a mercenary army to the war would simply add to the body count (and introduce a group he had no respect for). He demanded that the mercenaries depart. This put the military at odds with the government, and the violence spread to Papua New Guinea, where the prime minister stepped down.

Then another unlikely person said something sensible, something one hears almost daily in U.S. news media without it ever being meant seriously. But this guy, the Australian Foreign Minister, apparently actually meant it. He said there was “no military solution.” Of course, that’s always true everywhere, but when someone says it and actually means it, then an alternative course of action has to follow. And it certainly did.

With the support of the new prime minister of Papua New Guinea, and with the support of the Australian government, the government of New Zealand took the lead in attempting to facilitate peace in Bougainville. Both sides of the civil war agreed to send delegates, men and women, to peace talks in New Zealand. The talks succeeded beautifully. But not every faction, and not every individual, would make peace back home without something more.

A peace keeping contingent of soldiers, men and women, actually properly named “peace keeping,” led by New Zealand and including Australians, traveled to Bougainville, and brought no guns with them. Had they brought guns, they would have fueled the violence. Instead, with Papua New Guinea offering amnesty to all fighters, the peace keepers brought musical instruments, games, respect, and humility. They did not take charge. They facilitated a peace process controlled by Bougainvilleans. They met people on foot and in their own language. They shared Maori culture. They learned Bougainvillean culture. They actually helped people. They literally built bridges. These were soldiers, the only ones I can think of throughout all human history, whom I’d actually like to “thank for their service.” And I include in that their leaders, who — remarkably to someone used to seeing people like John Bolton and Mike Pompeo on TV — were legitimately not blood-thirsty sociopaths. Also remarkable in the story of Bougainville is the lack of involvement by the United States or the United Nations. How many other parts of the world might benefit from such lack of involvement? 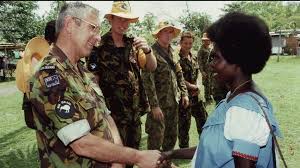 When it came time for delegates from around Bougainville to sign a final peace settlement, success was uncertain. New Zealand had run out of funds and turned the peace keeping over to Australia, which made many skeptical. Armed fighters sought to prevent delegates from traveling to the peace talks. Unarmed peace keepers had to travel to those areas and persuade armed fighters to allow the talks to be held. Women had to persuade men to take a risk for peace. They did. And it succeeded. And it was lasting. There has been peace in Bougainville from 1998 until now. The fighting has not restarted. The mine has not reopened. The world didn’t really need copper. The struggle didn’t really need guns. Nobody needed to “win” the war.