Rick Sanchez, an anchor for Russia’s RT-America, reported last week of “Signs that the US attempt to change-out presidents in Venezuela may be falling flat.” He was speaking about the in-plain-sight US coup attempt unfolding on the northern coast of South America against the elected president of Venezuela. Lucas Koerner, a reporter with Venezuela Analysis, told RT there was “an eerie calm” in Caracas. “Life continues as normal,” he said. Juan Guaido, the man out-of-nowhere the Trump administration anointed as “the legitimate president of Venezuela” first appeared on a Wednesday, then was not seen in public until Friday. Koerner emphasized the complexities: President Nicolas Maduro is, indeed, not very popular among the Venezuelan people, but Donald Trump and the United States, given its history in Latin America, is even more unpopular. A recent poll revealed that 70% of Venezuelans disapprove of the opposition-controlled National Assembly that elected a 35-year-old US-educated nobody its president. It has been reported that Guaido was never even a full-fledged member of the legislative body; he was an alternative deputy. The reason for his ascendancy to be Venezuela’s “legitimate president” is simple, according to Diego Sequera, a Venezuelan writer with the investigative publication Mision Verdad: Guaido is a handsome young man with no problematic background, which makes him sellable to a US market. He’s the classic expendable puppet.

Guaido was an energetic young activist seen in many anti-Chavez and anti-Maduro demonstrations, such as the violent demonstrations called guarimbas or violent fortresses. “Around 43 were killed during the 2014 guarimbas,” according to Gray Zone writers Dan Cohen and Max Blumenthal. “Three years later, they erupted again, causing mass destruction of public infrastructure, the murder of government supporters, and the deaths of 126 people, many of whom were Chavistas.” There’s even an online image of what appears to be the new “legitimate president of Venezuela” dropping his pants in a demonstration with other men in a common youthful gesture of disrespect. (The hairline in the photo, a rear view, seems to be his hairline.) The point is, US mainstream media entities like The New York Times (which I often defend to my leftist friends) NEVER cover or factor in this kind of planned, violent opposition. As someone put it, the problem in Venezuela is not socialism — it’s sabotage. It’s gone on for years and even included a failed coup. If these kinds of insurrectionary actions happened in the United States, people would be gassed and gunned down in the streets by police and the 82nd Airborne. All this is covered thoroughly in a Cohen/Blumenthal article in Gray Zone called “The Making of Juan Guaidó: How the US Regime Change Laboratory Created Venezuela’s Coup Leader”…. 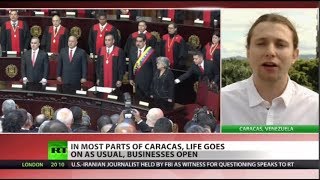