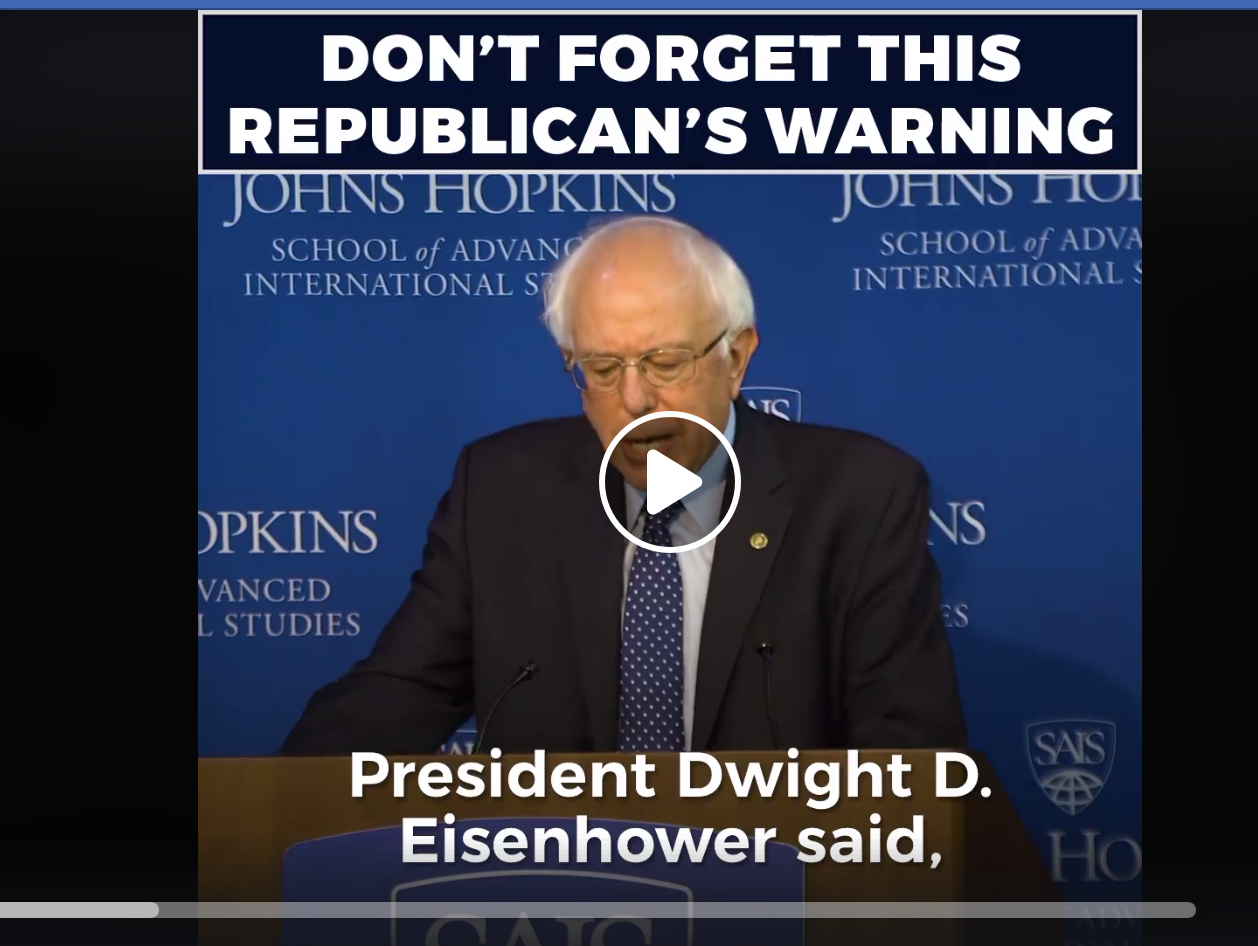 Bernie Sanders has added the existence of foreign policy onto the bottom of emails like the one below, after having posted a video of himself quoting the usual Eisenhower quotes on military spending. These changes match the request made when World BEYOND War and RootsAction.org asked 100 prominent people to sign an open letter to U.S. Senator Bernie Sanders urging him to address military spending. Over 13,000 more people signed it. Let’s hope that Senator Sanders builds on this progress. Let’s take the same demand to other politicians.

Jane and I want to take this opportunity to wish you and yours a very healthy and happy new year.

It goes without saying that 2019 will be a pivotal and momentous time for our country and the entire planet. As you know, there is a monumental clash now taking place between two very different political visions. Not to get you too nervous, but the future of our country and the world is dependent upon which side wins that struggle.

The good news is that, all across this country, people are getting politically involved and are fighting back. They are standing up for economic, political, social and racial justice.

In the last year we saw courageous teachers, in some of the most conservative states in the country, win strikes as they fought for adequate funding for education.

We saw low paid workers at Amazon, Disney and elsewhere undertake successful struggles to raise their wages to a living wage – at least $15 an hour.

We saw diverse communities stand together in the fight against mass incarceration and for real criminal justice reform.

We saw tens of thousands of Americans, from every walk of life, take to the streets and demand that politicians respond to the global crisis of climate change.

As we enter 2019, it seems to me that we must mount a two-pronged offensive. First, we must vigorously take on the lies, bigotry and kleptocratic behavior of the most irresponsible president in the modern history of our country. In every way possible, we must stand up to the racism, sexism, homophobia, xenophobia and religious intolerance of the Trump administration.

But fighting Trump is not enough.

The truth is that despite relatively low unemployment, tens of millions of Americans struggle daily to keep their heads above water economically as the middle class continues to shrink.

While the rich get richer, 40 million live in poverty, millions of workers are forced to work two or three jobs to pay the bills, 30 million have no health insurance, one in five cannot afford their prescription drugs, almost half of older workers have nothing saved for retirement, young people cannot afford college or leave school deeply in debt, affordable housing is increasingly scarce, and many seniors cut back on basic needs as they live on inadequate Social Security checks.

Our job, therefore, is not only to oppose Trump but to bring forth a progressive and popular agenda that speaks to the real needs of working people. We must tell Wall Street, the insurance companies, the drug companies, the fossil fuel industry, the military-industrial complex, the National Rifle Association and the other powerful special interests that we will not continue to allow their greed to destroy this country and our planet.

Politics in a democracy should not be complicated. Government must work for all of the people, not just the wealthy and the powerful. As a new House and Senate convene next week, it is imperative that the American people stand up and demand real solutions to the major economic, social, racial and environmental crises that we face. In the richest country in the history of the world, here are some (far from all) of the issues that I will be focusing on this year. What do you think? How can we best work together?

Protect American democracy: Repeal Citizens United, move to public funding of elections and end voter suppression and gerrymandering. Our goal must be to establish a political system that has the highest voter turnout in the world and is governed by the democratic principle of one person – one vote.

Take on the billionaire class: End oligarchy and the growth of massive income and wealth inequality by demanding that the wealthy start paying their fair share of taxes. We must rescind Trump’s tax breaks for billionaires and close corporate tax loopholes.

Increase Wages: Raise the minimum wage to $15 an hour, establish pay equity for women and revitalize the trade union movement. In the United States, if you work 40 hours a week, you should not live in poverty.

Make health care a right: Guarantee health care for everyone through a Medicare-for-all program. We cannot continue a dysfunctional healthcare system which costs us about twice as much per capita as any other major country and leaves 30 million uninsured.

Rebuild America: Pass a $1 trillion infrastructure plan. In the United States we must not continue to have roads, bridges, water systems, rail transport, and airports in disrepair.

Jobs for All: There is an enormous amount of work to be done throughout our country – from building affordable housing and schools to caring for our children and the elderly. 75 years ago, FDR talked about the need to guarantee every able-bodied person in this country a good job as a fundamental right. That was true in 1944. It is true today.

Quality Education: Make public colleges and universities tuition free, lower student debt, adequately fund public education and move to universal childcare. Not so many years ago, the United States had the best education system in the world. We much regain that status again.

Retirement Security: Expand Social Security so that every American can retire with dignity and everyone with a disability can live with security. Too many of our elderly, disabled and veterans are living on inadequate incomes. We must do better for those who built this country.

Women’s rights: It is a woman, not the government, who should control her own body. We must oppose all efforts to overturn Roe v. Wade, protect Planned Parenthood and oppose restrictive state laws on abortion.

Justice for All: End mass incarceration and pass serious criminal justice reform. We must no longer spend $80 billion a year locking up more people than any other country. We must invest in education and jobs, not jails and incarceration.

Comprehensive immigration reform: It is absurd and inhumane that millions of hardworking people, many of whom have lived in this country for decades, are fearful of deportation. We must provide legal status to those who are in the DACA program, and a path to citizenship for the undocumented.

Social Justice: End discrimination based on race, gender, religion, place of birth or sexual orientation. Trump cannot be allowed to succeed by dividing us up. We must stand together as one people.

A new foreign policy: Let us create a foreign policy based on peace, democracy and human rights. At a time when we spend more on the military than the next ten countries combined, we need to take a serious look at reforming the bloated and wasteful $716 billion annual Pentagon budget.

In the New Year, let us resolve to fight like we have never fought before for a government, a society and an economy that works for all of us, not just those on top.

Wishing you a wonderful new year,

One Reply to “Bernie Sanders Starts Mentioning the Military Budget”