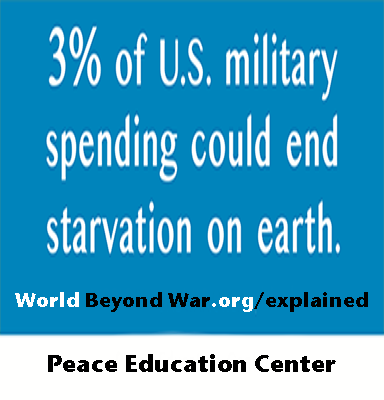 New billboards are going up around the United States and elsewhere opposing war. Some are not going up because the message is deemed unacceptable. Many more are being planned.

This ad at right is going up in various sizes and dimensions around Lansing, Michigan, thanks to the Peace Education Center. We’ll post the details on the billboards page when we have em.

The billboard below is going up for the month of January in Albany, NY — specifically on Erie Blvd. 1,000 ft north of Nott St., thanks to Upper Hudson Peace Action:

This one below is enlightening the good people of Pittsburgh, thanks to WILPF Pittsburgh:

Meanwhile, this ad is not going up anywhere, because we have not found any company willing to post it for good cold American cash:

If you can identify a billboard or busstop or other large-advertisement company that will take our money to post the above ad, it’ll be up immediately. Meanwhile, we’re going to try it out with online advertising.

Other antiwar and propeace billboards have gone up in these places:

We can put up more, and you can tell us where you want to see which ones, if you fund them.

Possibilities in the works include: messages of friendship against war and sanctions on billboards in Iran, and messages against NATO and for peace when NATO meets in Washington, D.C., on April 4, 2019. Send us other ideas!