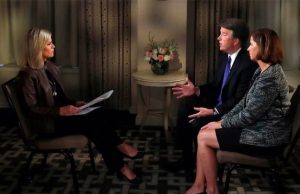 Whatever your view of Brett Kavanaugh, let’s get one thing clear:  While he’s hoping to become the ninth justice of the US Supreme Court, he is not on trial. He is facing a confirmation hearing by the Judicial Committee of the US Senate.

Republican backers of this clearly flawed and truth-challenged candidate are insisting indignantly, in the case of mounting charges from alleged victims, that he’s entitled to a “presumption of innocence” as several women claim he assaulted and harassed them as a teenager and perhaps when he was older, and amid evidence that he had a “runway model” standard for hiring female clerkship applicants as a judge on the Third Circuit Court of Appeals in Washington, DC which led Yale Law professors to recommend that female student applicants to clerkships for Kavanaugh “dress accordingly.”  (As one prominent professor is reported to have told such students, “There’s a reason all his female clerks look like models.”)

But that’s not how it works in a Senate confirmation hearing, any more than it’s how it works when you or I go to a job interview. Does an employer give an applicant a “presumption of innocence” when they contact prior employers to check on your work record?

Of course not. If I were applying for a job at a newspaper, the hiring editor would likely call prior papers I had worked at. If an editor there happened to be the one I told was simply caving in to pressure from big advertisers in killing a story I had done on corporate corruption in the appealing of tax assessments on major office building properties using two different sets of books for determining property value, and that person said I was “difficult to work with,” I would have no recourse.

I would be deemed guilty as charged, and moreover, I quite likely wouldn’t even have that Constitutionally guaranteed right to “confront my accuser,” because the hiring editor would have no obligation to even inform me of the evidence that was being used against me. That’s the way job applications work in the United States of America.

In that sense, unless a Senate Committee decides to hold a closed hearing, a confirmation hearing like this one for Judge Kavanaugh is considerably fairer than the situation most job applicants face. At least Kavanaugh, and other judicial candidates facing such hearings, gets to know what the charges are that are being made against him. That is at least if the majority party in control of the hearing doesn’t try to deep-six an accusation and pretend it doesn’t exist, as the GOP members controlling the Judiciary Committee tried to do with the second woman, Deborah Ramirez.