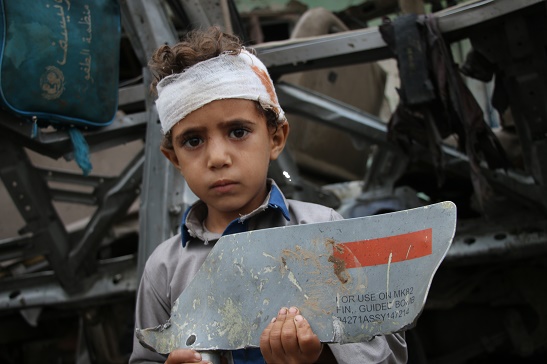 On August 14, a report from a grand jury investigation in Pennsylvania identified 300 Catholic priests across the state who had sexually abused more than 1,000 children. “Priests were raping little boys and girls, and the men of God who were responsible for them not only did nothing; they hid it all. For decades,” the grand jury wrote in one of the broadest inquiries into church sex abuse in U.S. history. Five days earlier, on August 9, in northern Yemen, a Saudi-led coalition airstrike hit a school bus with a missile made by Lockheed Martin and supplied to the Saudis by the U.S. government and 44 children were killed. Just as the horror of abuse of children by priests goes beyond the scope of the report from Pennsylvania, the children traumatized and killed by the U.S. military and its proxies globally number far more than those 44. Only one of these events sparked a crisis and soul-searching both in and out of the Catholic Church, but they both should have.

Some Catholic activists for peace and justice have long lived in a state of crisis with our church and have recognized the scandal of “men of God” who bless and cover for the abuse and murder of innocents through war, economic injustice and institutional racism.

“Over and over again in history the Church has become so corrupt it just cries out to heaven for vengeance,” Dorothy Day, co-founder of the Catholic Worker movement said in a 1970 interview. “The crisis is something terrific,” she said then, before the problem of sexual abuse of the young was well known. This crisis, she said, was “a result of the corruption in the institutional Church, through money and through their acceptance of the lousy, rotten system.”

A radical even before she became a Catholic in 1927 (“I have said, sometimes flippantly, that the mass of bourgeois smug Christians who denied Christ in His poor made me turn to the Communists, and it was the Communists and working with them that made me turn to God…”) Dorothy never had the “honeymoon” of blind love enjoyed by many new converts and was always conscious of the Church’s flaws and failings. “I was just as much against capitalism and imperialism as ever, and here I was going over to the opposition, because of course the Church was lined up with property, with the wealthy, with the state, with capitalism, with all the forces of reaction,” she wrote in her autobiography, The Long Loneliness. “This I had been taught to think and this I still think to a great extent.”

Even as a new convert, Dorothy deplored “the scandal of businesslike priests, of collective wealth, the lack of a sense of responsibility for the poor, the worker, the Negro, the Mexican, the Filipino, and even the oppression of these, and the consenting to the oppression of them by our industrialist-capitalist order – these made me feel often that priests were more like Cain than Abel.  ‘Am I my brother’s keeper?’ they seemed to say in respect to the social order…  There was plenty of charity but too little justice. ‘The worst enemies would be those of our own household,’ Christ had warned us.”

While the use of the word “scandal” to describe the Catholic Church is new and painful for many contemporary Catholics, it was constituent to Dorothy Day’s vocabulary: “I loved the Church for Christ made visible, not for itself, because it was so often a scandal to me,” she said. More than once she applied Jesus’ caution that our enemies are “of our own household” to priests and bishops. She confessed that it was these “enemies,” not the Viet Cong, not even the industrial war profiteers and generals, that she found the hardest to love and to forgive as Jesus bade her.

In a 1967 column entitled “In Peace Is My Bitterness Most Bitter” Dorothy wrote about Cardinal Spellman and his support for the war in Vietnam: “But what words are those he spoke — going against even the Pope, calling for victory, total victory? Words are as strong and powerful as bombs, as napalm.” “I can sit in the presence of the Blessed Sacrament and wrestle for that peace in the bitterness of my soul, a bitterness which many Catholics throughout the world feel, and I can find many things in Scripture to console me, to change my heart from hatred to love of enemy.”

In 2002, after growing awareness of clerical abuse of children and twenty two years after Dorothy Day’s death, the priest/activist Father John Dear decried the scandal of the Church’s support of the war in Afghanistan: “Last November, nearly all the U.S. Catholic bishops voted to bless and support the bombing and mass murder of the people of Afghanistan. We know that some 4000 civilians were killed during the first two months of that U.S. war. Hundreds of children were killed by the United States, and the Catholic bishops condoned their murder.” John Dear stated what should be obvious: “Talk about child abuse! The Church cannot condemn child abuse by pedophiles and yet bless the government’s murder of children in its wars, if it wants to be consistent and faithful to Christ.”

Many Catholics are now struggling with the question, “how can I remain in this abusive Church?” In her meditation on Cardinal Spellman, Dorothy Day asked “as to the Church, where else shall we go, except to the Bride of Christ, one flesh with Christ? Though she is a harlot at times, she is our Mother.” Dorothy often quoted theologian Romano Guardini, who said “the Church is the Cross on which Christ is always crucified. One cannot separate Christ from his bloody, painful Church. One must live in a state of permanent dissatisfaction with the Church.”

Long time peacemaker and resister, Father Daniel Berrigan once said “I don’t know a more irreligious attitude, one more utterly bankrupt of any human content, than one which permits children to be destroyed.” In a situation like the present, satisfaction with the Church and its institutions is unnatural, sinful, even, and to view the suffering of children without scandal is inhuman. For too long, the Church has abetted the abuse, exploitation and murder of children. I pray that the rising outrage in the Church over the exploitation of children, and the resolve to protect them, will encompass also the children who are victims of war.