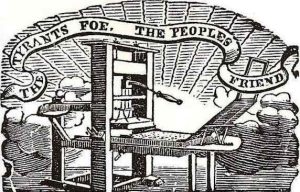 Some 300 newspapers, large and small, joined today in publishing, often on their front pages, editorials defending the First Amendment’s freedom of the press, often making note of their own efforts to combat current threats to that freedom posed by President Trump’s attacks on journalists and the entire Fourth Estate, which Trump routinely denounces in tweets and at rallies as “enemies of the people.”

However, missing from most of these full-throated editorials is any real defense of those who are in the trenches doing the hardest job of a free press, which is exposing the worst offenses of government:  the war crimes, the craven systemic corruption of the political system, and the purveying of propaganda and disinformation in the furtherance of anti-democratic policies. (A good example would be the employment by most major news organizations of retired generals and colonels as war commentators without noting their roles on corporate boards of arms merchants that profit form war — a scandal that not one major news organization will expose.)

Nowhere does one read, in these coordinated impassioned editorial paens to press freedom, a condemnation of the five-year torture and pursuit of journalist and Wikileaks founder Julian Assange, who has been holed up in the London embassy of Ecuador, hiding from a secret sealed indictment that since the days of the virulently anti-free-press Obama administration has been sitting in the Attorney General’s office waiting for his capture.

Assange is trapped in the cramped Ecuadoran embassy by a complicit British government that has threatened to arrest him if he exits the building, claiming he is wanted for jumping bail in a court case that was already long-ago mooted by the expiration of Swedish arrest warrant that itself was based upon trumped-up charges of “rape” made against Assange by women who say they had not wanted those charges made in the first place. His real crime, and the thing the US wants to extradite him from Britain for, is publishing leaked Pentagon documents and videotapes proving a policy in the Iraq war of massive and deliberate war crimes.

Although news organizations like the New York Times and Washington Post made the most of those Wikileaks documents, publishing their horrific evidence of war crimes, such as the helicopter gun-ship machine-gun slaughter of a group of innocent Iraqis, including two journalists, shown in graphic detail in a leaked gun-sight video, and profited handsomely from the circulation and attention they derived from those stories, both those papers have slammed Assange, shamelessly questioning his status as a “journalist,” impugning his integrity.

They have ignored the reality that any prosecution of him for the work done by Wikileaks in exposing war crimes opens the door to prosecutions in the future of other more “traditional” journalists.