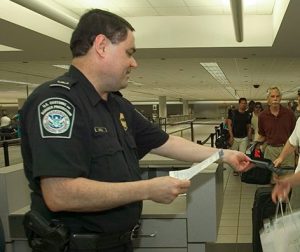 My wife Joyce and I came home last week from a three-week trip to Manila in the Philippines, and to Hong Kong and Beijing in China.

Even though Philippines President Rodrigo Dutarte has an ongoing program of murdering drug dealers on the streets, and China has a penchant for locking up critics of the regime — even Nobel Laureates — and beating up and arresting journalists, there was only one place on that jaunt where I personally felt like I was entering a police state at the immigration checkpoint: the USA.

At the Manila airport, the woman checking our passports was polite and friendly… and unarmed. She examined our passports matching the photos to our faces, stamped them, asked how long we were staying and returned them to us, wishing us a good stay.

In Hong Kong the process was typically swift and efficient, even when the officer, also unarmed, asked about Joyce’s work visa, which had an eight-day expiration (she was performing a harpsichord concert for a fee at the government radio station RTHK).

At the Beijing International Airport, where we were entering a full-blown police state, there were fingerprints and photos taken by an immigration officer who was professional, but friendly enough… and unarmed.

But when we got home and back to US immigration after landing at Newark , the scene was altogether different. Every immigration agent had a sidearm as well as a taser on her or his belt. Signs everywhere said phone, cellphone and computer use while in the interminable lines was barred, and hostile-sounding loudmouthed immigration officers were quick to scold anyone who violated that rule by trying to call some relative or friend waiting in the greeting area or to snap a pic of someone with them in line.

If nothing else there is an enormous amount of waste going on in at US border crossings. The INS, a division of Homeland Security, doesn’t need a person trained in policing and weapons tactics to check someone’s travel documents. All they need is what most countries have at their entry points: a bunch of polite people skilled at scrutinizing travel documents, and then a few people doing guard duty who maybe should be armed, at least with non-lethal weapons (the notion of officers firing their revolvers in a crowded immigration hall is, let’s agree, pretty horrifying!).

Guns really don’t belong in an airport immigration area at all (in fact, tellingly, when you see them being worn by passport control personnel, it’s usually in a police state). I mean, really, think about it. If there is one place that you shouldn’t have to worry about someone pulling out a weapon, gun or knife or anything scarier than a nail-clipper, it would be an immigration hall full of people who have already gone through at least one airport security check…