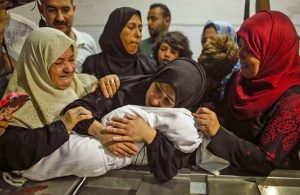 Hong Kong — Sitting in this peaceful city on the far side of world from the United States can put some things in perspective. For one thing, the local papers, both Chinese-language and the English-language South China Morning Post today featured front-page images of dead Palestinian protesters lying on the ground in Gaza. Accompanying articles focused on them latest day’s slaughter of over 50 (later upped to 61) unarmed Palestinians and the deliberate maiming, often with high-velocity fragmentation bullets that reportedly shatter bones and tear huge holes in their victims, of another 1000 or more, including children. Meanwhile, the international edition of the New York Timesfor two days following the shootings has yet to carry such a photo, and has yet to feature a leading article about the latest IDF massacre in Gaza. Instead page one featured a piece about the risks to Israel posed by the US opening of an Israeli embassy in the supposedly international city of Jerusalem.

The slaughter of protesters in Gaza was a minor point in that article.

Meanwhile, Hong Kong readers are elsewhere seeing and reading about the true horror of what has been happening in Gaza.

The killers and maimers there are soldiers of the Israeli army, all of them sitting safely on earthen berms themselves behind three rows of security fence inside of Gazan territory that keep the protesting Gazan “inmates” at bay, way too far off to even pose a threat by throwing stones. Yet the IDF snipers still kill and maim, often, as the viral videos below shows, laughing at the results or their target practice.

This one-sided violence is not a case of self-defense, though the Israeli government ludicrously tries to claim that because Palestinians are throwing rocks or attempting to, David like, use slings to toss them further, and are flying burning kites over the border in hopes if igniting Israeli farmers’ fields, they pose a serious threat. Nor is it a case of deterrence, as there’s no way Gazans can push through the walls confining them and enter Israeli territory. It is purely a case of asserting authority and attempting to cow a captive population — for Gaza is in reality the world’s largest prison camp, a place where food, medicine, fuel and even water are strictly controlled and limited by the prison owner and operator, Israel. Close to two million Gazans cannot leave this ghetto except with Israeli permission or by stealth — the former a rarity and the latter a deadly project. Recently the IDF even bombed a tunnel that was used to allow a few Gazans to slip into Egypt, and that had also allowed small amounts of scarce goods to be slipped into this hell-hole of Israeli’s making.

This month, the people of Gaza have been engaged in an ongoing and deliberately unarmed protest near the wall that constrains them from leaving their prison. They have continued to do so even as IDF soldiers continue to shoot them with impunity using high-powered rifles, and also firing tear gas and rubber bullets at them.

Let’s be clear: What the IDF is engaged in is exactly what Nazi troops were doing in the early days of the notorious Warsaw Ghetto…