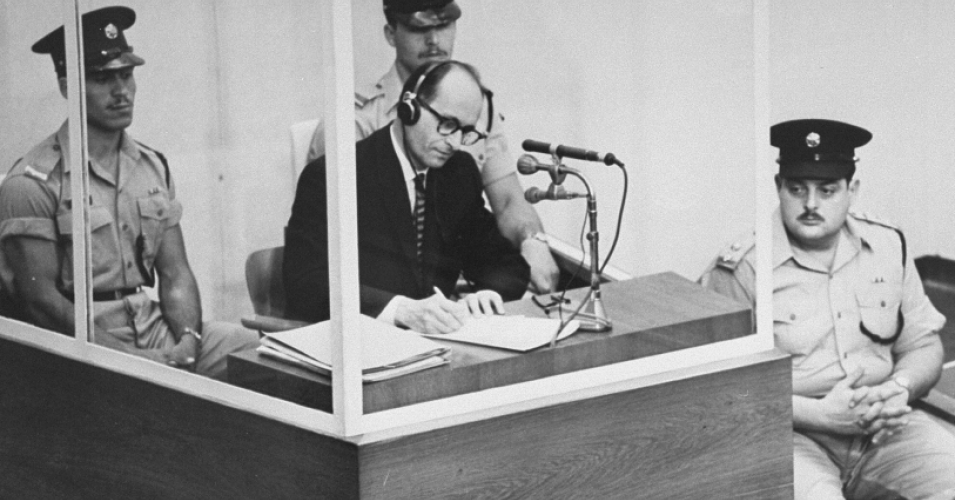 On May 9, Gina Haspel, Donald Trump’s choice for head of the Central Intelligence Agency, testified at her Senate confirmation hearing in Washington, DC. Some senators questioned her about her tenure, in 2002, as CIA station chief in Thailand. There, the agency ran one of the “black sites” where suspected al-Qaida extremists were interrogated using procedures that included waterboarding. She was also asked about her role in the destruction of videotapes in 2005 that documented the torture of illegally detained suspects.  Her evasive answers to these questions, disconcerting and unsatisfying, are also hauntingly familiar.

In 1960, Adolf Eichmann was kidnapped by Israeli spies in Argentina and brought to trial in Jerusalem for his part in the extermination of millions of European Jews during Germany’s Third Reich. In his interrogation with Israeli police, published as Eichmann Interrogated, DeCopo Books, NY, 1999, Eichmann stated that in the intervening years since the acts in question his own view of them had evolved and before the Senate on May 9, Haspel expressed herself similarly.

Haspel testified that while she can’t say what exactly might constitute an immoral order in the past, her “moral compass” would not allow her to obey one today, given the “stricter moral standard” she says “we have chosen to hold ourselves to.” She does not judge the actions that she and her colleagues took in the years after 9-11, “in that tumultuous time” of decidedly looser moral standards: “I’m not going to sit here, with the benefit of hindsight, and judge the very good people who made hard decisions.” She testified that she supports laws that prohibit torture, but insists that such laws were not in place at the time and that such “harsh interrogations” were allowable under the legal guidance the CIA had at the time and “that the highest legal authority in the United States had approved it, and that the president of the United States had approved it.”

Likewise Eichmann was probed about his obedience when “ordered to do something blatantly illegal.” In a response that augured Haspel’s Senate testimony a half century later, Eichmann told his interrogators: “You say illegal. Today I have a very different view of things…But then?  I wouldn’t have considered any of those actions illegal…  If anyone had asked me about it up until May 8, 1945, the end of the war, I’d have said: This government was elected by a majority of the German people…every civilized country on earth had its diplomatic mission. Who is a little man like me to trouble his head about it?  I get orders from my superior and I look neither right nor left.  That’s not my job.  My job is to obey and comply.”

Not to compare the evil of the holocaust with the CIA rendition and torture (as if evil could be measured by quantity) but the evasions and obfuscations of these two willing technicians of state terror are chillingly similar. Eichmann’s cowardly protestations that he could not have known that facilitating torture and murder was illegal ring hollow. It was only after Eichmann’s atrocities, though, that such crimes as torture were formally codified into law. By 2002, however, along the precedents of the war crimes tribunal at Nuremberg, the United States was legally bound along with most nations in the world to the Geneva Conventions, to the Universal Declaration of Human Rights and the United Nations Convention against Torture. Even the U.S. Army Field Manual, cited by Haspel in her hearing, labels waterboarding as torture and a war crime.

“We all believed in our work. We were all committed,” Haspel proudly boasted to the Senate, describing the morale and esprit de corps of her CIA comrades overseeing illegal detention, torture and murder in the years after 9-11. Eichmann similarly praised the work ethic of his team. Inspired by Eichmann’s trial, Thomas Merton, in his poem, “Chant to be Used in Processions Around a Site with Furnaces,” put these words in the mouth of a condemned concentration camp commander: “In my day we worked hard we saw what we did our self-sacrifice was conscientious and complete our work was faultless and detailed.”

An Israeli court did not buy Adolf Eichmann’s defense that he was following orders and obeying the law as he understood it and he was hung on June 1, 1962. We will soon know if the U.S. Senate will accept Gina Haspel’s appropriation of Eichmann’s alibi and confirm her as Director of the Central Intelligence Agency.

Defendant Adolf Eichmann takes notes during his trial in Jerusalem. The glass booth in which Eichmann sat was erected to protect him from assassination. (Photo credit: Israeli Government)

One Reply to “Two Interrogations, Gina Haspel and Adolf Eichmann”