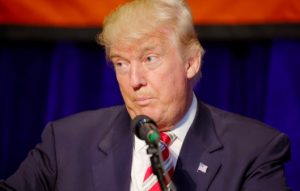 Here’s a bizarre contrarian thought — one admittedly based on limited and dubious evidence and that flies in the face of a more than a year’s contrary evidence, and that is more along the lines of a desperate hope than reality, but what the hell. Bear with me:

Suppose for a moment that President Donald Trump, a narcissistic man of little intellect and even less intellectual rigor, but with a pretty acute sense of the nation’s political mood, has realized that he has been pushed by the so-called “permanent government,” over the past year, far away from his stated intention expressed during the 2016 campaign to re-set relations with Russia on more friendly terms, and away from his call to pull the US military back from its over-extended involvement in wars in the Middle East, Africa, Latin America and eastern Europe, and to instead focus on rebuilding the US economy. Suppose that his recent behavior and decisions, which the corporate media for the most part are portraying as the desperate actions of a man abandoning his advisors and deciding to “go by his gut instincts instead,” are not that at all. Suppose instead that he has decided to fight back against the concerted effort over the past year by the Washington foreign policy and intelligence establishment to hem him in and prevent him from doing those things he had wanted to do.

Okay, I know it’s a stretch, but if all that were in fact the case, could the tossing out of another 60 Russian diplomats in support of Britain’s spurious and fact-free accusation of a Putin-ordered poisoning of a former Russian double agent and the naming of the horrifying Neocon warmonger John Bolton as his new and third national security advisor have been something different than they appear? Could they be not a sign that Trump wants to both ramp up a new Cold War against Russia and to launch wars against North Korea and Iran, but rather actions designed to shore up his conservative wing, while he actually returns to his original campaign-enunciated intention to de-escalate US foreign policy, and build a new era of cooperation and friendship with Russia?

The only real evidence for this wild speculation I’m offering here is the rambling campaign-like speech Trump gave on Thursday to assembled union workers in Ohio, in which he claimed that the US campaign in Syria — where over 2000 US special forces troops are leading a group of anti-Assad rebels ostensibly against ISIS forces, though also often against Syrian government troops — is “winning” and that those troops will “be home soon.”  He also, in that speech, decried, as he did a month ago, the alleged $7 trillion the US has spent on military campaigns in the Middle East, from Libya to Syria and Iraq and Afghanistan, which he correctly notes have won the US “nothing”…