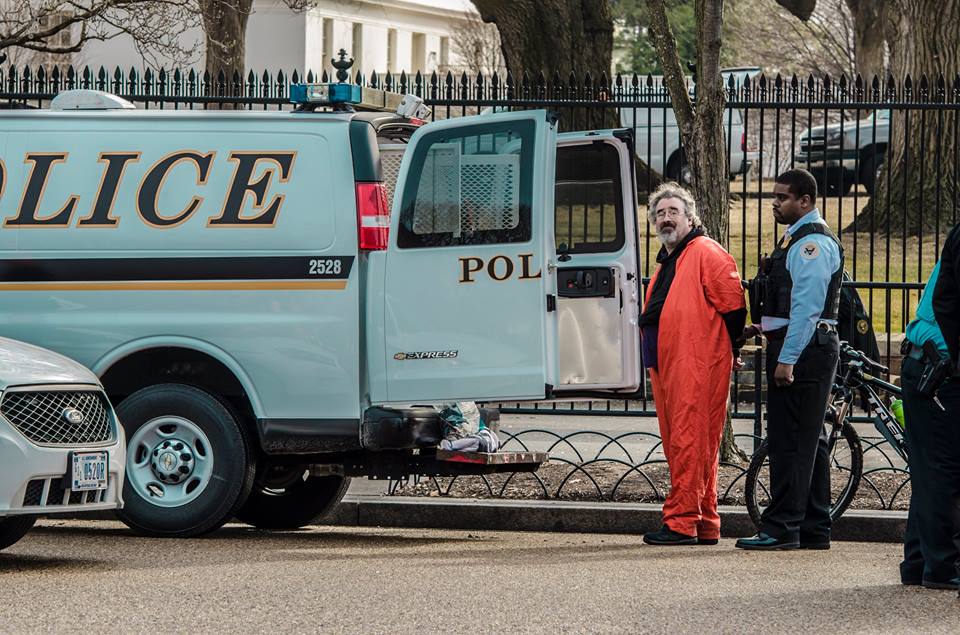 On Thursday, January 11, the sixteenth anniversary of the opening of the US military prison at Guantanamo Bay in Cuba was marked by a coalition of 15 human rights organizations gathered in Lafayette Park, across Pennsylvania Avenue from the White House in Washington, DC. An interfaith prayer service was followed by a rally featuring song and poetry and addresses by activists from the sponsoring organizations, including attorneys for some of those detained at Guantanamo, few of these charged with any crime and some cleared for release years ago. Despite his declaration that “In the dark halls of Abu Ghraib and the detention cells of Guantanamo, we have compromised our most precious values,” President Obama failed to fulfill his promise to close the prison and days before his inauguration last year, Donald Trump tweeted, “There should be no further releases from Gitmo. These are extremely dangerous people and should not be allowed back onto the battlefield.”

I participated in the day’s events as part of the Witness Against Torture community. This was our fourth day of fasting, reflection and action together and many of us wore orange jump suits and black hoods representing the 41 Muslim men still held there. After the rally, WAT performed a simple ritual, serving 41 cups of tea one at a time to “detainees” who each lifted their hood to accept their cup and take a sip before laying it down in a row on the sidewalk. The names of the men were spoken aloud and had been written on each of the styrofoam cups, remembering that drawing and writing on such cups has been one of few outlets for expression for many detainees.

Immediately after the tea was served, five of us, Ken Jones, Manijeh Saba, Helen Schietinger, Beth Adams and I, stepped into Pennsylvania Avenue, walking toward the White House with a banner calling for the release of these 41 along with the thousands imprisoned in immigration detention centers and the millions of victims of hyper-incarceration in the US. To approach the White House, we needed to cross under yellow police line tape and were immediately arrested by uniformed Secret Service police.

I have been attending protests at the White House since Jimmy Carter lived there and with each succeeding administration, the space allowed for political discourse has been reduced and the once protected free speech of citizens increasingly criminalized there. Under Trump, half the width of the formerly public sidewalk in front of the White House is fenced off, the inner perimeter now patrolled by officers armed with automatic weapons. Pennsylvania Avenue, long ago closed to vehicular traffic, is now closed off to pedestrians at the hint of a demonstration. This public forum, a place of protest and advocacy for more than a century, the place where the vote for women and benefits for veterans were won, has been strangled to the point where no dissent is tolerated there.

The five of us were vigorously searched and taken to a local DC Metro Police station where we were photographed, finger printed and charged with “crossing a police line.” My four friends where released from the station after a few hours with a pending court appearance date, as is usual for such petty crimes as ours. I, on the other hand, was transferred by the Secret Service to the Central Cellblock to be brought before a judge the next day.

The booking sergeant told me that if it were up to the Metro Police, I would go home with my friends. The arresting authority, however, was the Secret Service and they wanted me held over due to an apparent outstanding case from Las Vegas. Last April, I was arrested at the armed drone operation center, Creech Air Force Base in Nevada, for the alleged crime of disturbing the peace. The District Attorney in Las Vegas declined to file any charge against me (maybe because I was disturbing the war?) but the chief judge of the Las Vegas Justice (sic) Court summonsed me to appear before him on September 25 anyway. I made a motion to the court for clarification and received a response from another judge that I was not required to appear in answer to the summons. I also got official notice from the DA’s office that they had “determined not to file formal charges at this time.” Apparently the chief judge was not happy with that decision and decided to take the role of prosecutor himself and issued warrant for my arrest.

Central Cellblock is a crowded, noisy, roach infested hot box where all those arrested and held for various crimes around the city are collected for their initial appearances in court the next day. I was one of more than 90 men who spent the day shunted in chains from cell to cell between the jail and the court. Of these, there was one Latino and a young man from Mauritania, the rest African American. I was the only white man arrested in all of Washington, DC, on January 11 that the authorities chose to keep in jail.

Late Friday afternoon the United States Attorney decided not to press the “crossing a police line” against the five of us and so I was released before coming to court. Had I appeared before a judge, the government would likely have asked the court to hold me over for extradition as a fugitive from justice in Nevada. If this were granted, the Las Vegas authorities would then have had three days to come to DC to fetch me if they cared to.

In our group planning the events of January 11, the question came up about the usefulness of risking arrest for this cause. For myself, beyond strategic benefits, is the issue of solidarity. Just as we fast for a few days as a small gesture of sharing the suffering of the brothers in Guantanamo on hunger strike, so arrest and a few hours in a police station cell can bring us closer to understanding their unjust confinement. My intention was more than realized this time! The suppression of free speech in front of the White House is not the crackdown on the Arab Spring in Bahrain and Central Cellblock is not Abu Ghraib. My would-be extradition to Las Vegas is not “special rendition” to Jordan or to Guantanamo. These evils, small or large, are all growing from the same roots of imperial arrogance and in our different places and conditions, we are in this struggle together.

One Reply to “Solidarity from Central Cellblock to Guantanamo”