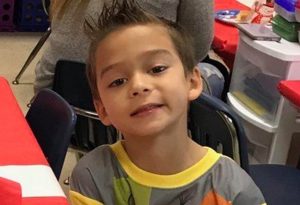 Kameron Prescott is dead — the latest in a horrific string of children killed by America’s fearful and quick-to-shoot law enforcement professionals.

Six-year-old Kameron, who was shot in Bexar County outside San Antonio, Texas, wasn’t killed like Tamir Rice in Cleveland, who was mowed down by a police officer within seconds of his arrival on the scene as the boy sat peacefully on a bench in a park pavilion holding a toy gun. Kameron wasn’t deliberately shot. He was just “collateral damage” in America’s militarized police war on the public — killed inadvertently by a deputy’s bullet which had missed its intended target (an unarmed woman), instead penetrating the flimsy wall of the trailer and the soft abdomen of the little kid who was playing peacefully by himself inside.

The reason Kameron had his all too short life cut brutally short was because some deputy “feared for his life.”  What the shooter feared was 30-year-old Amanda Jones, whom he had been reportedly chasing for two hours through the woods and a deep stream after having interrupted her allegedly trying to break into a car. According to news reports, halfway through the long pursuit, Jones had been found by police hiding in a closet in a mobile home she had broken into to. They claimed she had “brandished a gun,” though inexplicably, she had managed to escape them and run off again.

When the Bexar County sheriff’s deputies — four of them by then — finally caught up with her, Jones was standing on the porch of young Kameron’s trailer. At that point, whether she in fact had ever actually had a gun at all, there is no indication that she had a gun in her hand. But no matter, the four deputies on the scene all reportedly opened up on her with their service revolvers and also with a rifle. They managed, among them, to kill her, but they also missed her in their panicky fusillade, and one of those errant bullets pierced the trailer and killed the little boy inside. No gun was found on the scene, which raises thequestion: Why did they shoot the woman?  We’re to believe that four burly sheriff’s deputies — no doubt wearing body armor — couldn’t subdue an unarmed young woman?

There were reportedly two adults — grandparents according to one report, unrelated to Jones — also inside the trailer who had better luck than little Kameron. They were not hit by any stray bullets, but I’m sure their hearts were broken.

Sheriff Javier Salazar told reporters somberly at a press conference that “any one of my us” in the department would “gladly have traded places with that boy.”  Nice sentiment, sheriff, but I really doubt any of them would have actually taken Kameron’s bullet for him.