This past weekend, my wife and I drove up to Connecticut to attend my 50th high school reunion (which was a great event). But on the way there, we stopped off at a local B&B to drop off our luggage since we’d booked the place for that night. While we were standing just outside the open entryway of the 250-year-old house talking with the innkeeper, there was a loud explosion and a blast of air. It turned out there had been a gas explosion in the inn’s kitchen which, while it didn’t ignite a fire, did severely burn two chefs whose restaurant was catering an event that evening, as well as three waiters.

The victims were brought outside the home and laid on the ground with blankets and we all tried to ease their intense pain, to comfort them as best we could and to keep them from going into shock while waiting for fire trucks and rescue vehicles to arrive.

I mention this because it was so impressive to see the mostly volunteer firefighters from this rural area who raced to the scene in minutes rush straight into the house, unafraid of another blast, to search for any possible victims still inside and to insure that there wouldn’t be any further explosions. Meanwhile, a few firefighters with EMT training started more serious evaluation and treatment of the victims’ injuries.

Firefighters have always amazed me by how astonishingly dedicated and brave they are — and the volunteer ones especially, since they put their lives on the line all the time like that for no remuneration.

This came to mind as I thought of President Trump’s stuffed shirt chief of staff, the retired Marine Gen. John Kelly, and his recent dissing of Congresswoman Frederica Wilson (D-FL), whom he disparagingly called an “empty barrel” and just a former public school teacher. In Kelly’s stated view, America’s soldiers, especially the ones killed in battle, are the “finest one-percent” of all Americans “because they are the very best this country produces, and they volunteer to protect our country when there’s nothing in our country anymore that seems to suggest that selfless service to the nation is not only appropriate, but required.”

He also said that America’s soldiers “are not making a lot of money,” but “love what they do.”

Clearly, Gen. Kelly thinks that America’s firefighters, it’s EMT workers, or others who work in dangerous, stressful, and often low-paid jobs that are critical to the functioning of this American society, are of a lower caliber than soldiers like himself

This is the most repulsive kind of militaristic jingoism. 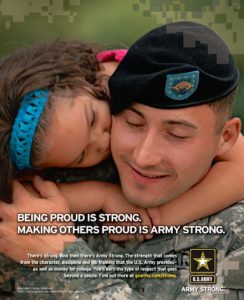 First of all, let’s be honest: in today’s American volunteer military, most soldiers don’t sign up because of love of country, though some or even many of them may well love it. They sign up because they need a job, and maybe even envision a military career, they sign up to get trained for a future career outside the military, they sign up for the GI benefits that include paying for college. But the majority of them do not ever go into combat, or even want to go into combat. Many opt to go into the National Guard for that very reason. Eighty percent of the positions in the military are non-combat in nature, and even fewer than one in five in the military ever actually see a combat zone even when there is a major war on…

For the rest of this article by DAVE LINDORFF in ThisCantBeHappening!, please go to: www.thiscantbehappening.net/node/3684