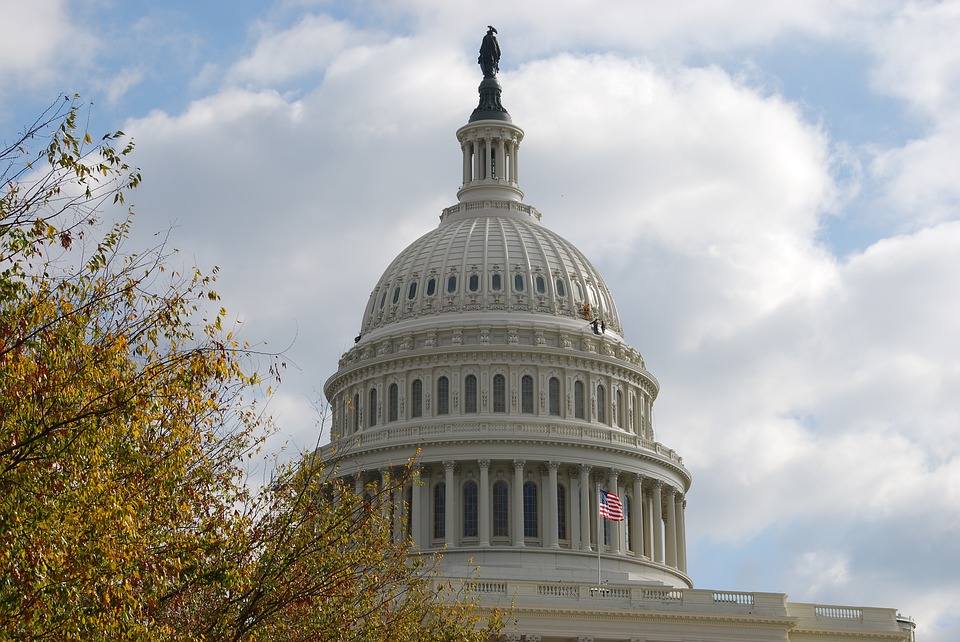 Both houses of Congress have now passed big new sanctions bills by veto-proof majorities, in fact with near unanimity. The vote this week in the House of Misrepresentatives was 419–3 on a bill to sanction Russia, Iran, and North Korea as punishment for primarily imaginary crimes, despite the sum total of the global legal bodies having asked the United States to judge these crimes, skip over a trial, and move right ahead with punishment being exactly equal to the number of principled opponents of war employed on Capitol Hill.

The most recent vote in the Senate on a version of the bill that did not yet include North Korea was 97-2. The Senate will now take up the new bill for another vote.

Why do I call the crimes being punished imaginary? The latest House bill calls itself a bill “To provide congressional review and to counter aggression by the Governments of Iran, the Russian Federation, and North Korea, and for other purposes.” Where is the aggression?

The bill requires the U.S. government to produce something the bill does not include or refer to, namely a report on Iran’s crimes, which are to include “destabilizing activities,” possession of a military (Congress wants to know exactly what a war on Iran would be up against), possession of chemical and biological weapons (there exists no evidence that Iran has either, though it does have a fatwa against them and refused to retaliate in kind when attacked with them by Iraq with U.S. help in the Iran-Iraq war), possession of ballistic missiles. There is no mention of violating the nuclear agreement or any other actual law. There is mention of “terrorism” and “human rights violations,” things few if any governments on earth are innocent of, least of all the United States, which of course is also openly guilty of destabilizing activities, possessing chemical and biological weapons, etc.

The bill seeks to punish Russia for interference in U.S. and other elections — crimes for which we would almost certainly have seen evidence by now if any existed — and for the “illegal annexation of Crimea” — illegal because opposed by a coup government in Kiev despite being supported by almost everyone in Crimea at the time and to this day. The 2014 vote by the people of Crimea to re-join Russia involved zero casualties and has never been repeated because poll after poll shows the people happy with their vote. I have seen no written or oral statement from Russia threatening war or violence. If the threat was implicit, there remains the problem of being unable to find Crimeans who say they felt threatened. If the vote was influenced by the implicit threat, there remains the problem that polls consistently get the same result. The United States had supported the secession of Kosovo from Serbia in the 1990s despite Serbian opposition. When Slovakia seceded from Czechoslovakia, the U.S. did not urge any opposition. The U.S. supports the right of South Sudan to have seceded from Sudan, although violence and chaos reigned. U.S. politicians like Joe Biden and Jane Harman even proposed breaking Iraq up into pieces, as others have proposed for Syria. How is a vote by the people of Crimea an act of aggression and all the rest of this acceptable?

Much of the “punishment” of Russia for these supposed crimes is clearly driven by economic competition. Other elements involve communications competition. The bill demands a new report on Russian media, Congress apparently having found the third-grade book-report-style report by the CIA some months back unsatisfactory.

Meanwhile, this legislation requires the production of reports on North Korea cooperating with Iran (a supreme international crime, as everyone knows), and abusing human rights (something never ever done in Guantanamo, Chicago, or Riyadh.

What actually drives these sanctions? As I discussed earlier on this site, and this week on Russian television, sanctions are acts of aggression aimed at selling weapons, preparing the ground for war, responding to successful propaganda, advancing economic interests, and distracting the public from government abuses it might object to. Of course U.S. sanctions against North Korea for 67 years, Cuba for 57 years, and Iran for 38 years have only strengthened the control of those in power in those countries — and the same effect is documented now in Russia. But sanctions led the way to all-out war on Iraq and may now serve that purpose in Iran. Intentional total war with North Korea or especially Russia is less likely because of their nuclear weapons. But these designated enemies are very useful to the weapons industry nonetheless.

There are serious reasons to oppose new sanctions. They create hostility with nuclear governments. They lead toward further militarization and a possible catastrophic attack on Iran. They turn much of the world against the United States. They create major economic conflicts with Europeans who oppose further sanctions on Russia. They tear down the rule of law, replacing it with the practice of might-makes-right. They divide a world that simply must unite if it is to mitigate the climate apocalypse.

So, it ought to be encouraging that a few members of Congress opposed a bill driven by intense anti-Russian propaganda. What gave them the nerve to do something so decent and risky? In short: they’re as nuts as the bill’s opponents and have their own unrelated reasons for opposition.

Congressman Tom Massie of Kentucky was one of the three Congress members, all Republicans, to vote No. “I voted against vague, expensive, and reckless sanctions,” he says. “H.R 3364 would vastly expand unilateral executive authority. This bill cites the United Nations and United Nations Security Council resolutions as controlling legal authority instead of U.S. law and the Constitution. As a co-sponsor of legislation to get the United States out of the UN, I oppose citing international law as authority for congressional action.”

The fact that sanctions are used as tools of war in violation of the U.N. Charter isn’t enough. The fact that the United States is making itself global judge, jury, and executioner doesn’t measure up. That the bill mentions the United Nations as a fig leaf for its piracy is beyond the pale.

“This bill authorizes $250 million for a vague Countering Russian Influence Fund,” Massie says, “with no accountability on who these funds will go to or how they will be used. It also contains language that expands the Treasury’s ability to issue blanket warrants without probable cause, a clear violation of the 4th Amendment. In addition, this legislation threatens businesses and jobs across the country, including some in Kentucky.”

Opposing a slush fund for anti-Russian activities is critical. It’s always nice when people not trying to end mass surveillance or impeach anyone overseeing it take notice of the Fourth Amendment. And I’ve got nothing against jobs. But putting these concerns behind U.N.-bashing and never even considering the serious harm to peace and security, or the many hundreds of thousands killed by past sanctions in Iraq, is just crazy.

Congressman Justin Amash of Michigan tweeted: “Russia part of sanctions bill is too broad & undefined. Bill also includes $ for Ukraine energy & #4thAmendment-violating #HR5602 from 2016.” All quite true, but all extremely minor concerns.

Rep. John Duncan of Tennessee had no one available to answer the phone in his D.C. office on Wednesday.

In the Senate, one of the few Senators to have voted against any previous version of these sanctions is Rand Paul of Kentucky, whose explanation has ranged from they’re not tough enough to China does it too to the U.S. does it too.

And Senator Bernie Sanders, who has sometimes voted No, has said, “I am strongly supportive of the sanctions on Russia included in this bill. It is unacceptable for Russia to interfere in our elections here in the United States, or anywhere around the world. There must be consequences for such actions. I also have deep concerns about the policies and activities of the Iranian government, especially their support for the brutal Assad regime in Syria. I have voted for sanctions on Iran in the past, and I believe sanctions were an important tool for bringing Iran to the negotiating table. But I believe that these new sanctions could endanger the very important nuclear agreement that was signed between the United States, its partners and Iran in 2015.”

Seeking a wiser view, I turned to Ajamu Baraka of Black Alliance for Peace, who told me that “sanctions and escalating rhetoric on the possibility of war, have become a convenient bi-partisan diversion from the policies that continue the assault on basic human rights in the U.S. from lack of affordable healthcare to intensifying police violence. But as polls demonstrate, people in the U.S. are starting to catch on to the fact that they are being manipulated, and are questioning the permanent war agenda.”

“We have a moral responsibility to oppose the war agenda of the 1%,” Baraka said, “not only in the interests of working class people in the U.S. who will be sacrificed once again for that agenda, but for the people in those nations that find themselves in the cross-hairs of U.S. aggression. There is no more fundamental human right than the right to life. The massive violation of that principle when nations conduct war compels all of who defend human rights to resist in words and deeds.”