I’ll admit here that I gave up on National “Public” Radio some years ago, around the time they began running promos for their agribusiness and other corporate sponsors. NPR’s coverage of the Iraq war was so carefully tailored to show the view through approved windows that I began to lose respect for their journalistic integrity. More like the New York Times and The New Yorker magazine, really, puffing Obama while panning Republicans, signalling their fealty to the other corporate war party.

This week I invited others concerned about the rampant killing of civilians by flying killer robots to contact NPR objecting to their recent interview with drone contractor and author Brett Velicovich.

Self-billed as a drone warrior, Velicovich continues to profit from using flying killer robots to attack others who couldn’t possibly fight back as the “warrior” attacking them is remote and often thousands of miles away. Such courage! Such valor! (Such bullshit.)

The propaganda in favor of weaponized drones is pervasive and well funded. Veterans for Peace past president Leah Bolger posted this item to a no-drones listserv I’m on:

The Intrepid Sea, Air and Space Museum is having a huge 8 month exhibit on drones.  They asked to display the Drones Quilt Project and I had reserved 6 quilts for them, but at the last minute they said they didn’t have any room.  I talked to the curator — Nick Mottern talked to him, Chris Antal talked to him — but they wouldn’t change their minds.  They said they were just exhibiting the history of drones (all kinds) and that they only had a couple of pictures of Predators, and that they didn’t glorify them.  But then I noticed that they had scheduled this:

BOOK LAUNCH Drone Warrior: An Elite Soldier’s Inside Account of the Hunt for America’s Most Dangerous Enemies By Brett Velicovich and Christopher S. Stewart

For nearly a decade, Brett Velicovich used drones to take down the world’s deadliest terrorists. He shared his harrowing experiences with Pulitzer Prize–winning writer Christopher S. Stewart. Hear them discuss their captivating book.

The Drones Quilt Project expanded on their coverage of this propaganda effort in a post noting that the museum with no room to display an art project based on civilian victims of U.S. militarized drones did manage to find space for Lady Gaga’s drone dress.
Would you be surprised to know that the New York Times review of the museum exhibit mentioned the victims of drones exactly once, in the headline? “Drones Kill, Yes, But They Also Rescue, Research, and Entertain” was their sanitizing contribution to the practically non-existent national debate on the ethics of endless warfare via remote control bombing by robots.
Currently, the corporate media would have us very, very scared that the demogogue with bad hair has his finger on the red button of nuclear destruction. News outlets like the NYT thought it was great when Obama ramped up the budget for nuclear weapon research and development, just as they thought it was great when he became the president with ten times more drone blood on his hands than his predecessor.
A tiny bit of corporate media attention is given to the PTSD that drone operators — presumably operators less tough than warrior Velicovich — suffer from after viewing the “bug splat” of civilians who died when they pushed their buttons.
This is how the manufactured consent for endless wars at taxpayer expense is maintained: by controlling the information available to the public.
Here’s the museum’s self-description to provide the flavor of this sort of propaganda effort:

New York City’s Intrepid Sea, Air & Space Museum Complex is an educational and cultural non-profit institution centered on the aircraft carrier Intrepid. The mission of the Museum is to promote the awareness and understanding of history, science and service through its collections, exhibitions and programming in order to honor our heroes, educate the public and inspire our youth. [emphasis mine] Join us for a dynamic, interactive and educational journey for all ages.

“Inspire our youth” is code for military recruiting. Or maybe it’s code for recruiting youth in poverty, and inspiring youth in the upper classes to pursue higher education with an eye to contributing to the high tech killing. If successful, they could write a book and go on tour to display their courage.
Recruiting in Chicago got a big boost last week when Mayor Rahm Emanuel, Obama’s former chief of staff, announced that no one would get their high school diploma until they were either signed up for a school or other program, employed — or joined the military. 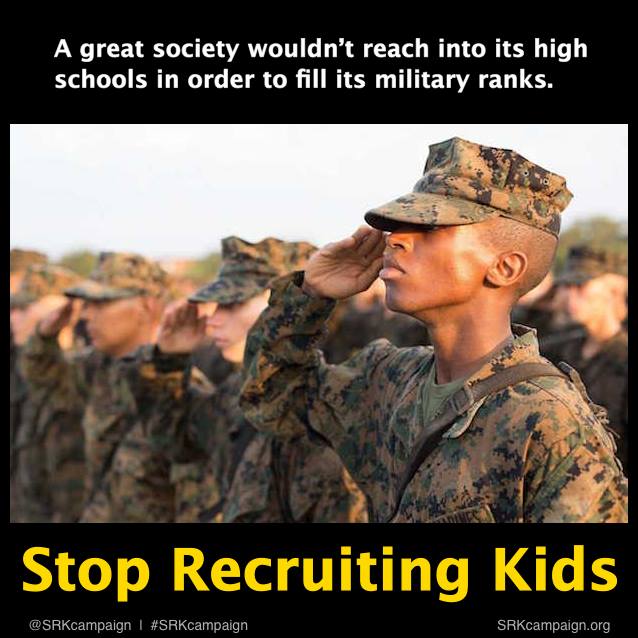 This strikes me as grounds for a whopping law suit and I expect the kickass Chicago Teachers Union will be one of those bringing legal action on behalf of the students.
Managing information is one thing, but losing a relative to PTSD or suicide is another. The most fascinating actual news of the week was this article in Mondoweiss reporting on a study that linked combat deaths of U.S. military personnel to swing states that voted for the demagogue with bad hair in the last election. Because that candidate falsely represented himself as a non-interventionist, researchers Douglas Kriner and Francis Shen examined voting patterns and published “Battlefield Casualties and Ballot Box Defeat: Did the Bush-Obama Wars Cost Clinton the White House?”
In other words, running as a pro-war candidate may have alienated voters poor enough to actually know someone who came home in a box.
Now that the U.S. has robots to do some of the killing, the percentage of active duty military is extremely small, like 1% of the population. This helps corporate media and other propaganda organs to hype war as glorious.
Tell that to the kids in my family whose veteran dad recently killed himself with a gun in their bathroom after suffering for years from combat-induced PTSD.